Hair of the Dog Cake


If ye be feeling rough, get thee into the kitchen and make this cake.  Yarr!  Hair of the Dog cake.  Interesting.  In the book, the Baked boys say this cake is also known as Rum Flavoured Hot Milk Cake with Broiled Rum Brown Sugar Frosting.  They had me at the first 'rum'.  I think the former, rather than the latter is an easier name.  But the latter name makes me want to make this cake right now.  I mean right freakin' now!  There's rum in it!!!  Rum!  Rum!  Redrum!  No, none of that...only rum.

So when I saw that the next recipe was a cake, I panicked a smidge.  For me, a Baked cake means layers and well, I still get anxious making layer cakes.  But wait, this cake is only one layer.  Panic receding....


First I need to pick a rum.  Right now, the only rum in the cupboard (other than the light rum) is Appleton's and Sailor Jerry.  The recipe calls for a dark rum.  These rums are more of an amber.  I'm a fan of the amber.  I thought we still had some Kraken...but I guess we 'released the Kraken'.  (drank it all) 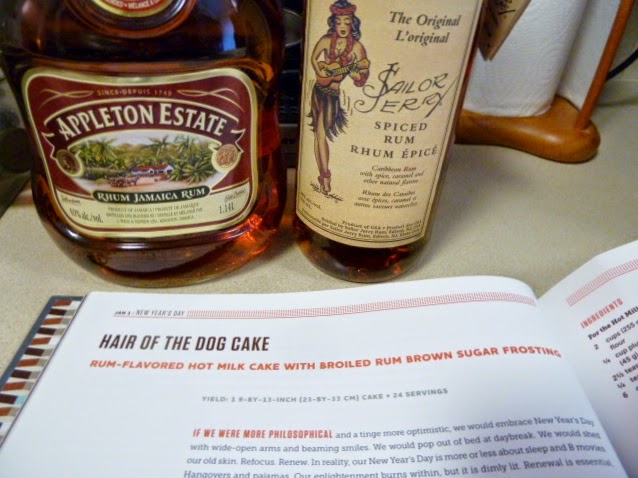 Sailor Jerry said all the right things, so he's going to play in the kitchen with me today.
Fun Rum Fact:  Appleton's is actually my favourite rum, period.  But when you need a little spice in your life, Sailor Jerry makes everything all right.  And I think the spice and caramel flavourings of this rum will blend perfectly with this cake.  (Right, cake.)  Almost forgot we were making a cake here!

Simple, simple cake.  But I guess that is a good thing, as this cake is a hangover cure (what?  it totally could be) and to be made New Year's Day.  Now really, no one can say no to something flavoured with rum.  I mean come on!  Rum!  I'm not one to exaggerate (unless you talk to anyone that knows me).  But I would daresay, that Rum is the nectar of the Gods.  Which Gods?  Umm, well...
Hey look, butter! (and milk) 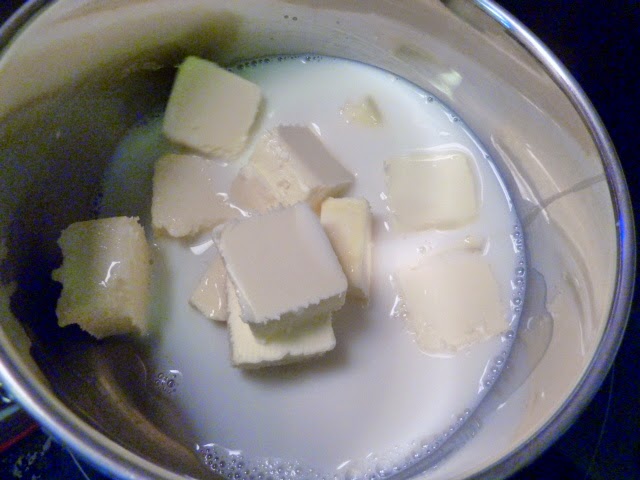 No creaming of butter for this cake.  Nope, just melted along with milk. 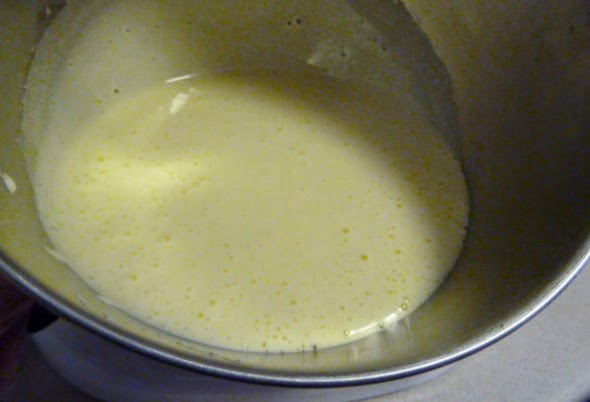 In a separate bowl, the eggs and sugar got whisked together until nice and thick. 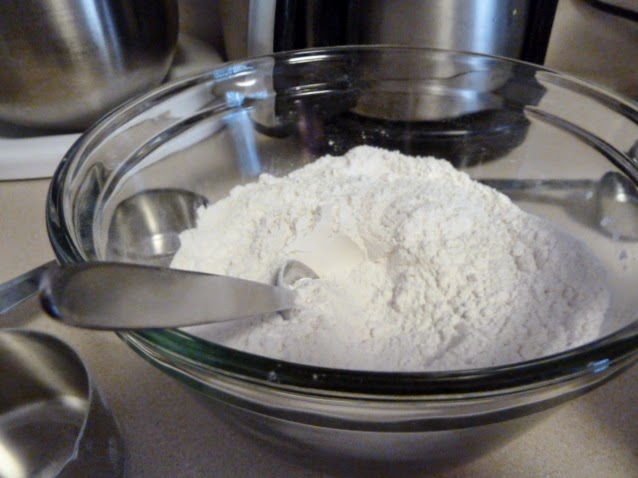 And then the flour mixture was dumped in and incorporated.  So far, so easy.


Lastly, the warmed(but not boiling) butter and milk (with rum and vanilla added in) gets poured into the mix and stirred together. 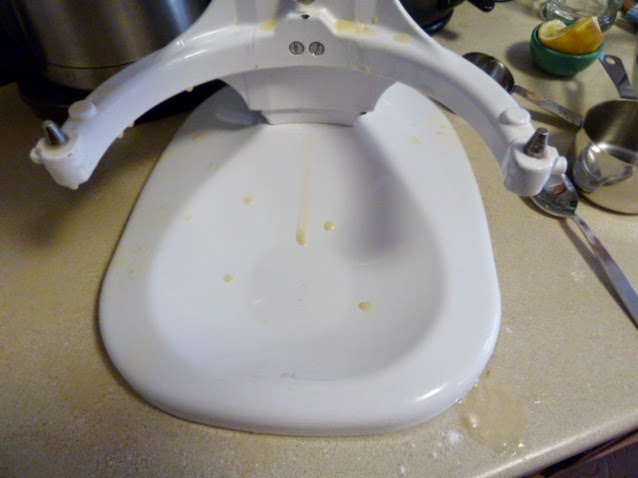 This was supposed to be a no muss recipe (as per my Baked Boys).


But I appear to have made a muss.  Wait, is muss the same thing as mess??  To the Google! Yes, I guess it's the same...unless you look at Urban Dictionary.  For the love of my rum Gods, Urban dictionary! (my gods are cutting you off ) 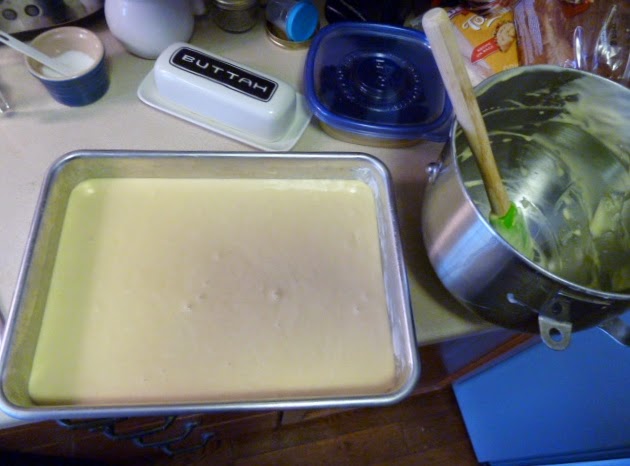 To the oven!  Now I have time to clean up this muss mess in the kitchen.

Thirty five minutes and this beauty was ready to come out of the oven. Hellooooo nurse! Yes, I'm an Animaniac.  A proud, card carrying (she carries no card) Animaniac. 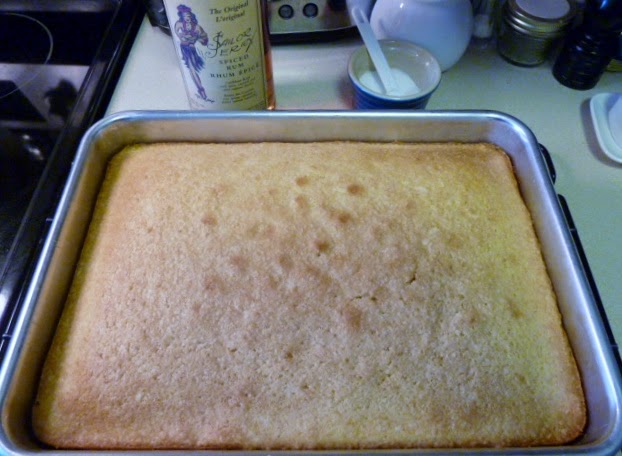 This will cool a bit, while I make the Broiled Frosting.  I don't know what it is either.  But apparently the cake still needs to be warm when the frosting is poured over it. 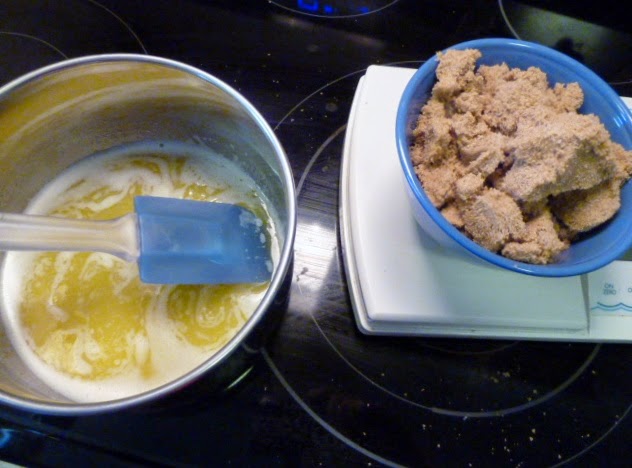 The ingredients for the frosting are butter, brown sugar, cream and rum.

This is not a typical frosting.  But hot damn if it doesn't smell good.  Good enough to drink one might say (if said person were me).  Better get to pouring this over the cake. 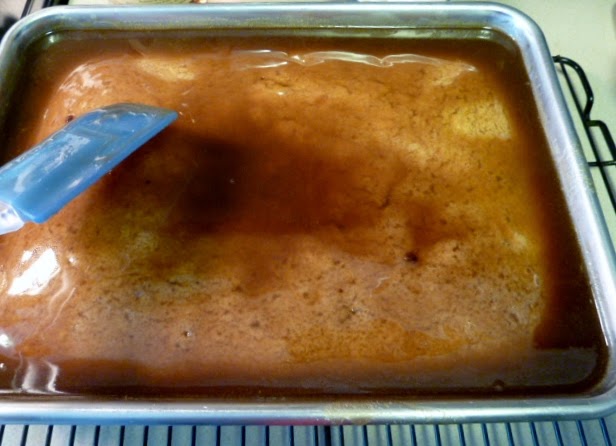 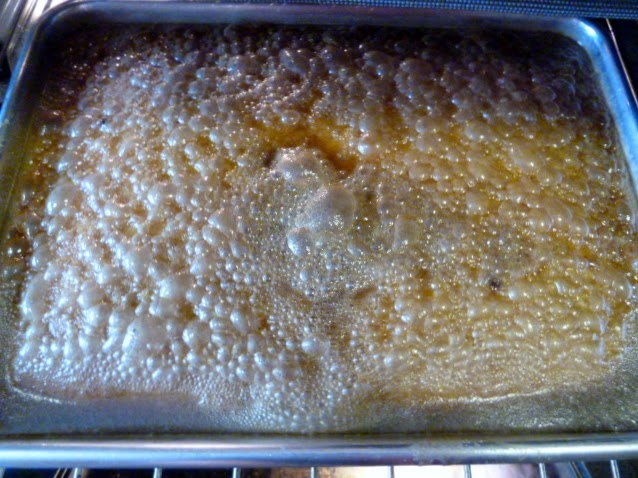 It starts to bubble.  But don't pull it out yet. (That's what she said.)

Just let it continue to bubble and then brown. 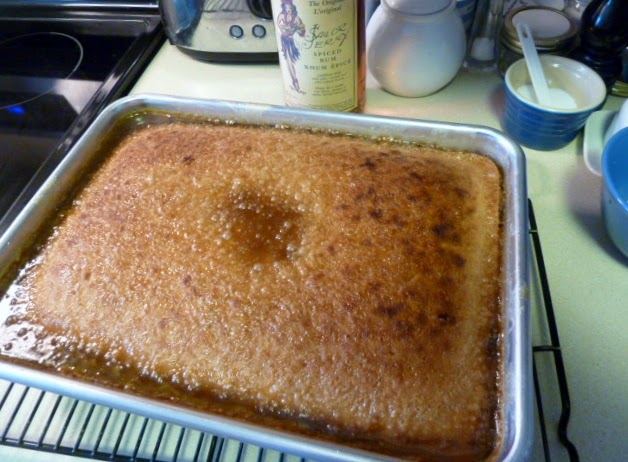 This cake now has a lovely brûlée crust on top.  Helloooo Nurse!  (Quit it!)


I'm surprised that the recipe didn't say to poke holes all over the cake, so that the frosting could sink into the cake.  Now I wish I had done that.  Cake remorse is the worst remorse of all.  (At least for today it is.)  Coulda, shoulda, woulda.  Waa.

Next up, is the whipped cream.  Which also has rum in it.  (Did I mention that already?)   The recipe calls for 1 to 2 tablespoons of rum.  Huh?  That's like saying I can have a hundred dollars or a million dollars.  So 2 tablespoons it is!  Boo-ya!


OH.MY.GOD.BECKY!  This cake is sofa king good!  And it isn't just because it has everything I love...rum, rum and lastly rum.  Okay, well it is mostly the rum flavours that come through and really make this cake shine.  I would imagine that if one did not like rum (egads) this cake would not be enjoyable.  But I am sure it would work just as well with many other flavours.  I bet Grand Marnier would be lovely.  Imagine that brûléed top flavoured with Grand Marnier.  Drool.

To get the recipe and to see how the rest of the Baked gang liked this cake, head over to Baked Sunday Mornings.

Happy New Year to you.  Thanks for being out there.  The next Baked Sunday morning recipe is Gingersnaps with Lemon Sugar.