Yay, a bread recipe!  I love bread.  And I love the idea of making bread.  I will probably always say this when starting a bread recipe. (You've been warned.)  I want to be a bread maker.  Sometimes I do feel like a bread maker (at least when the bread I'm making turns out).  There is nothing better than a warm slice of freshly baked bread, slathered with butter.  I don't think there is anything more satisfying than bread.  I will say, bread is my most basic comfort food.  It is something I search out in our city (Ottawa) and where ever we go.  As I've mentioned numerous times, my all time favourite bread (in Ottawa) is from True Loaf.  I know I'll never master the art of bread making (at least at the level of a true baker) and I'm okay with that, because I have found places that make incredibly good bread. 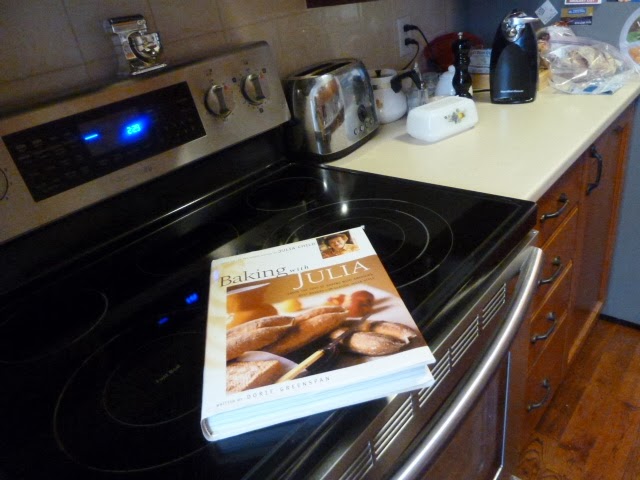 
The first thing that needs to be made, is a sponge.


Is it just me, or does anyone else think of Burt Reynolds looking at Spongebob laying like this?  Come on!  Do you think they have Cosmo (magazine) under the sea. (Yeah, you know what I'm talkin' about.)
So I'm making a sponge for the bread.  The sponge consists of water, yeast and flour. (Three flours to be exact; bread flour, whole wheat and rye.) 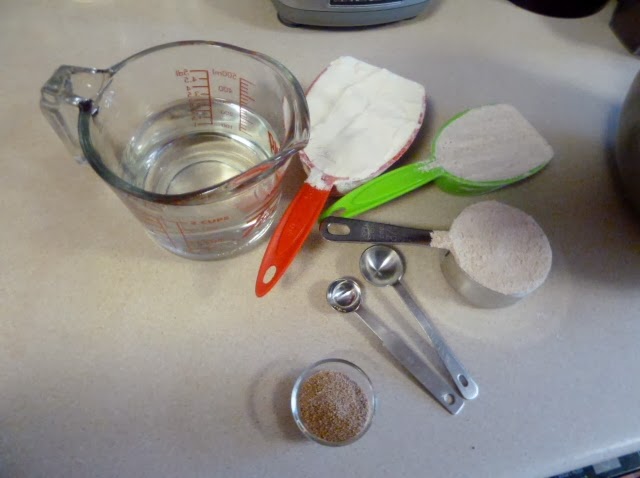 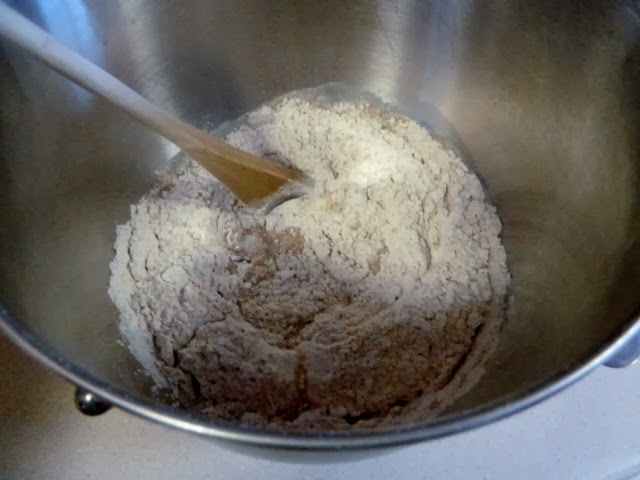 After the yeast got all nice and creamy in the water (no Spongebob involved), it was time to mix the flours into the mixture. 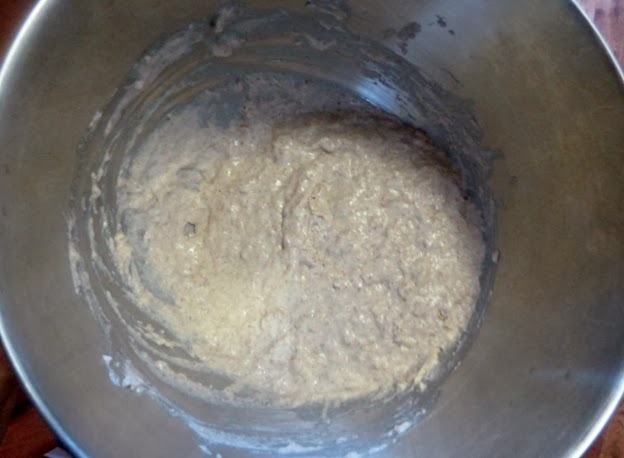 Pretty simple process for the sponge. 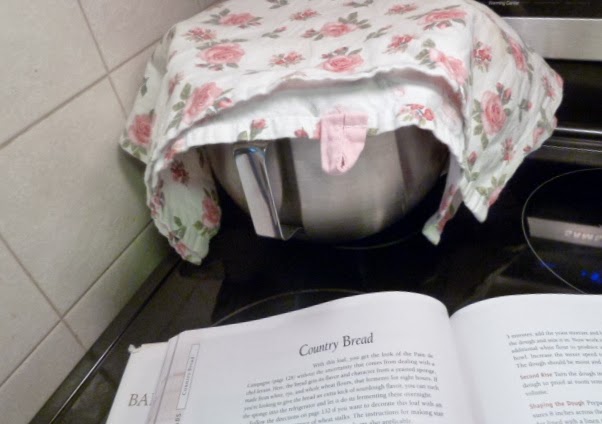 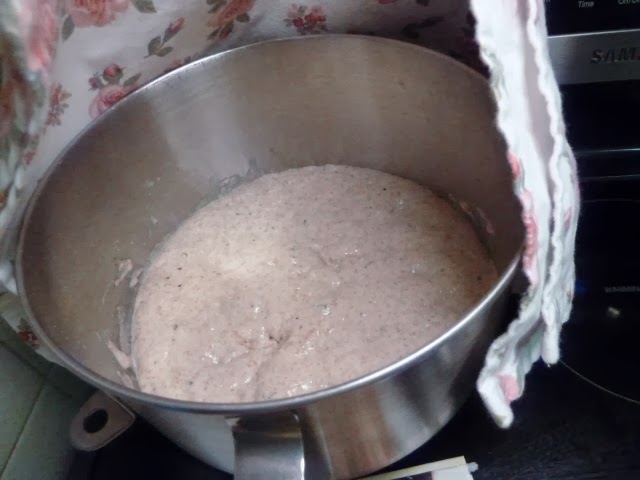 This is what it looks like two hours in.  (The bread making magic has begun.) 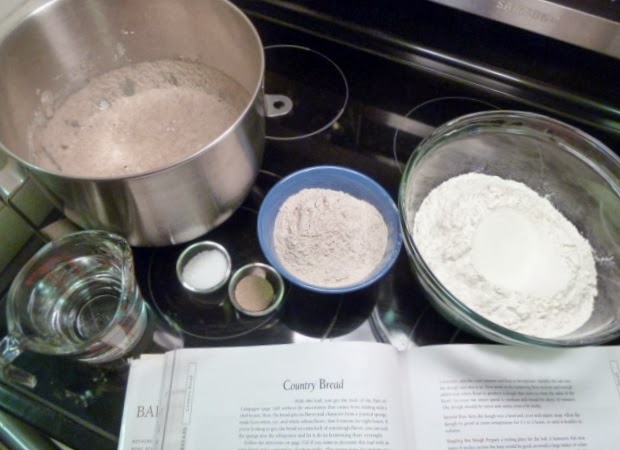 Now that the sponge has been sitting around fermenting overnight, it is ready to be mixed up with the rest of the ingredients. (More water, yeast, flour and some salt.) 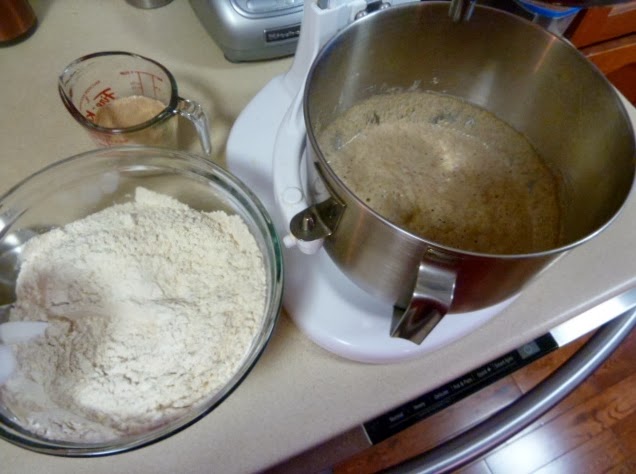 I will save you from the floury mess that I made in the kitchen.  (Kitchen tip:  don't dump all the flour into the mixture and then turn on the kitchenaid to medium and then turn your back on it...unless you have  the broom and dust pan handy.)  It was like a silent messy explosion of flour.  Good times. 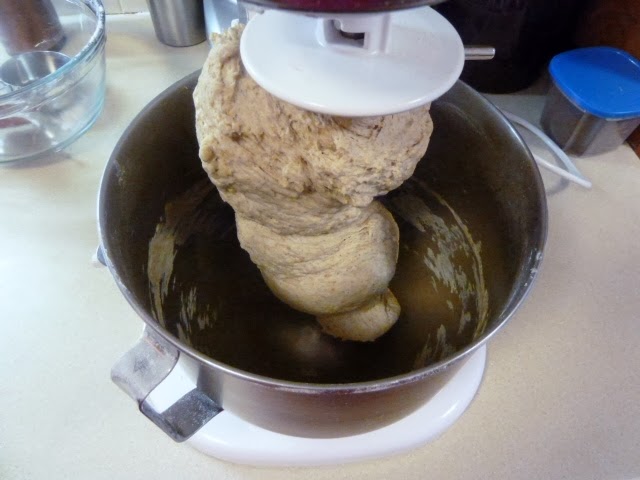 After ten minutes of mixing with the dough hook, my kitchenaid is still alive (and very hot and bothered).  Glad it survived, as my upper back could not have handled any kneading this week. 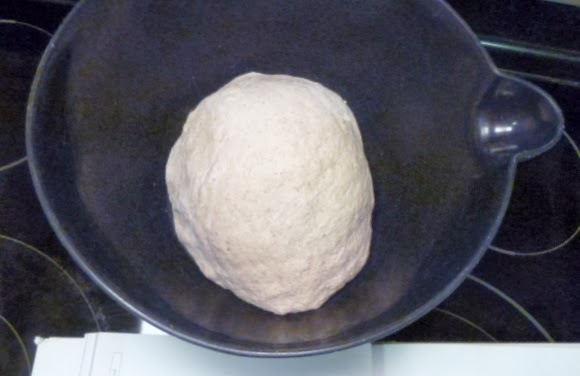 This ball of dough needs to rest for about 2 hours. 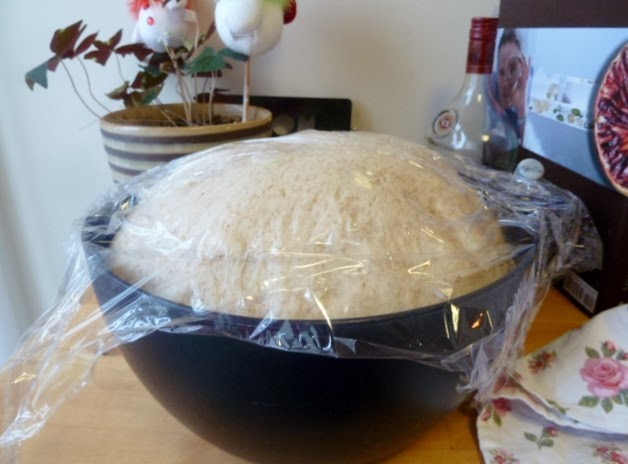 Whoa!  That is some good rising. 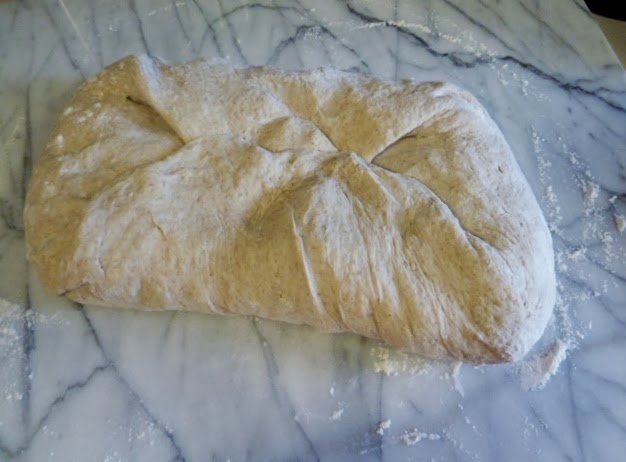 Next, the dough gets put onto a lightly floured surface and flattened.  Then the edges are folded and patted down.  This gets the air out of the bread. 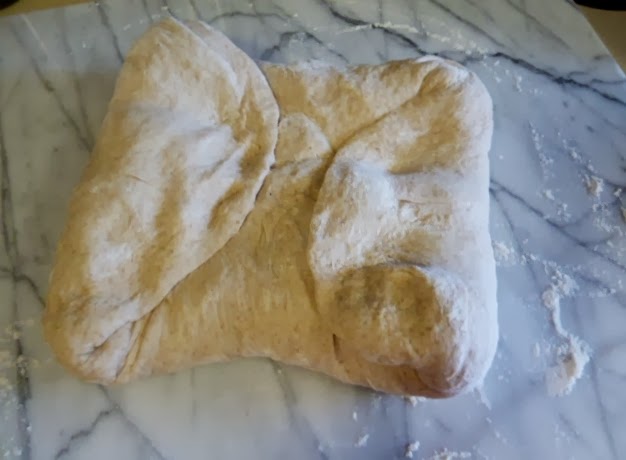 The edges keep getting folded and patted down until it is formed into a ball.


Damn.  I'm thinking I put the dough into the floured cloth the wrong way.  Well, I've got an hour and a half to confirm that....do'eth. 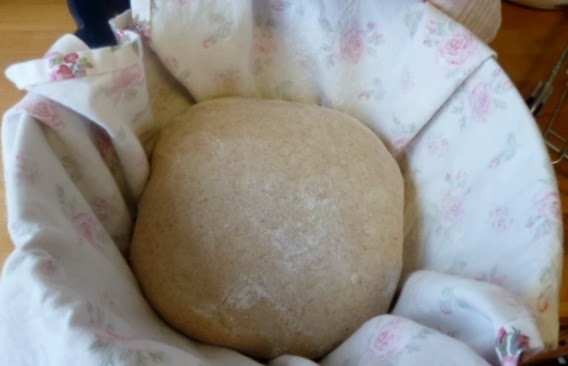 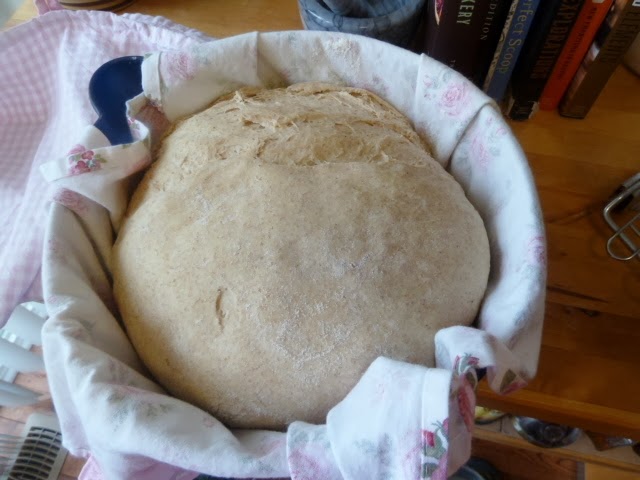 Yep, I should have put the smooth side down, so that it was protected.  And then when I took it out, the bottom would become the top of the bread when I moved it to the pan.  (That may only make sense to me.)
Oh well.  Besides, would it really be a post (of mine) if I didn't in some way not follow the instructions?  Hmm? 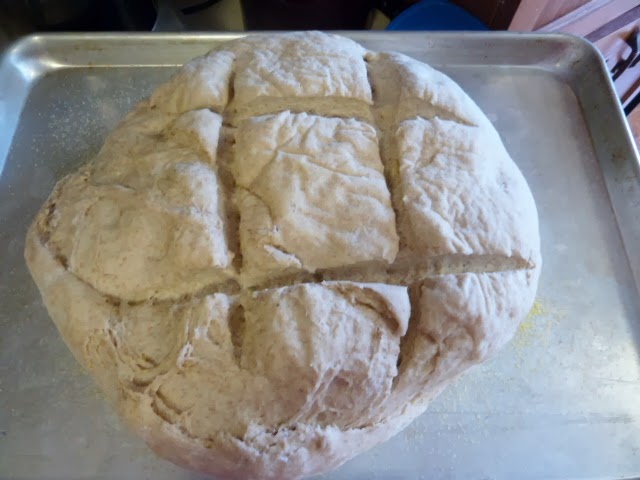 I put a few slashes into the top of the dough.  Perhaps a smidge too deep.  (Beware of the Slasher.)  Perhaps someone needs to stop watching the show Grimm.  Just sayin'.


Oven and pizza stone have been preheated.  Rather than bake it right on the pizza stone, I left it on the baking sheet (that was sprinkled with cornmeal).  I threw a few ice cubes in the oven before I put the bread in the oven.  That may sound like a random thing to do, but honestly it's a bread baking thing.  And the bread will bake for about an hour.

It is smelling rather good in the kitchen.  I sure hope this turns out!

Here it is straight from the oven.  I took its temperature and it measured 200 degrees as suggested in the recipe.  If bread could talk, there would have definitely been a 'hey, where you puttin' that thermometer lady', moment.  (Thankfully bread cannot talk.) 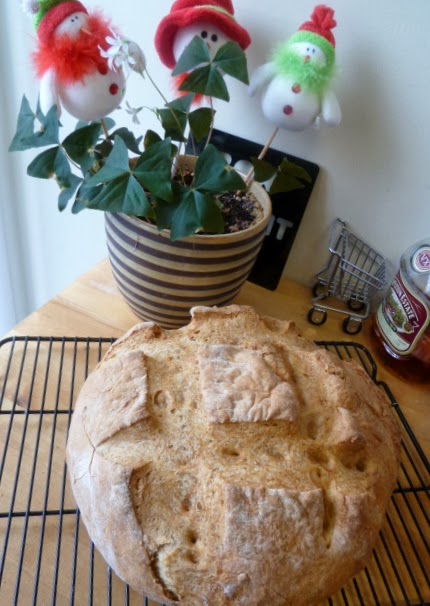 Well, I think the bread looks fabulous.  It feels like it is going to be super crusty. (Not in a salty old sailor sort of way.)  I see many, many crumbs (in my future) on the floor, after this bread is cut.  But that step needs to wait until it is completely cooled.  (Cookbook says so, and I'm all about following instructions...Mmm Hmm...ask anyone who doesn't know me and/or has never read my blog, they'll agree.) 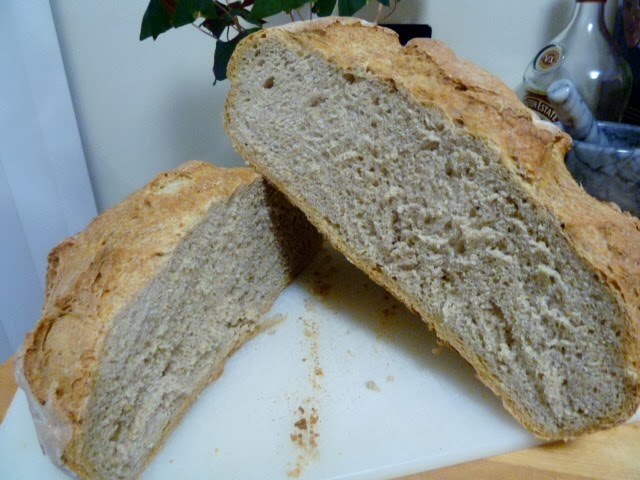 This bread is good.  It is a true country loaf, with a rustic feel.  The outside is crusty and chewy while the inside has a tender crumb.  This is a bread you want to cut into thick slices and eat alongside a big bowl of soup.  (Dipping the crust into the hot soup.)  And that is exactly what we did for dinner.  Bowls of tomato soup with thick slices of this beautiful bread (and some sharp cheddar).  Perfection.
I have to admit, this bread makes me a little melancholy as it reminds me of the loaves of bread my mom would buy.  She loved the crusty country loaves.  And I know she would have loved this one too.(And not just because I made it!)