Seriously not so Snappy


I loved gingersnaps as a kid.  There isn't much I don't like when it comes to ginger. (Except these.)

I have never made gingersnaps.  To be fair, I haven't made a lot of things when it comes to 'Baking with Julia' and I am so glad for the experiences (good and bad) that I've had baking out of this book.  I have learned a lot during this time in TWD land.

Gingersnaps....that was one of the gangs in Westside Story, right?  I may be wrong.  But can't you picture a gang of Gingers snapping their way towards you!  I wasn't allowed in the gang, due to a condition known as 'not being able to snap my fingers'. (True story.) 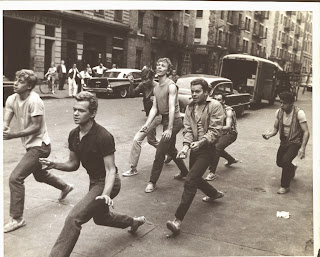 Okay, just watched the video ...for the cookies...not the West Side Story.   And I'm ready to go.  This is another easy looking recipe. Yay! 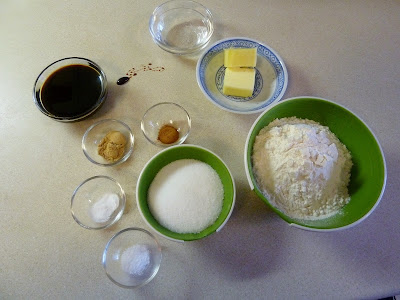 Seriously, this is it for ingredients?
Surely, I'm missing something?  Checking....

Nope, that is it.

The sugar, molasses, butter, baking soda, salt, ground ginger, and cinnamon get mixed together in the kitchenaid.  Next, the tablespoon and a half of water get added and finally the flour.  Seriously, this is it?  Surely, there must be more to this recipe than this?  Checking.....
Nope, that is it.

Frank is not impressed at all.  Only Frankenstein's closest friends get to call him Frank.  It's true!  Why would I make something like that up?

But seriously, he is not a happy dude.

He wasn't happy scooping the molasses out of the dish. 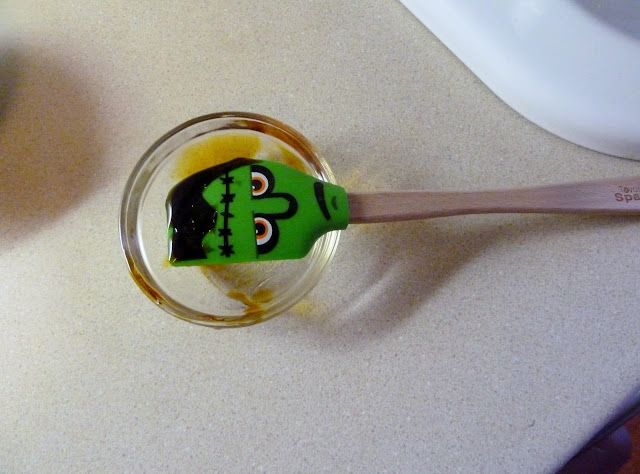 And he wasn't happy scraping down the bowl.  I think he thought he was safe, since Halloween is over.  Silly Frank!  I love Halloween!!  It's not over until I say it's over. (Said in a scary Kathy Bates in Misery sort of way.) 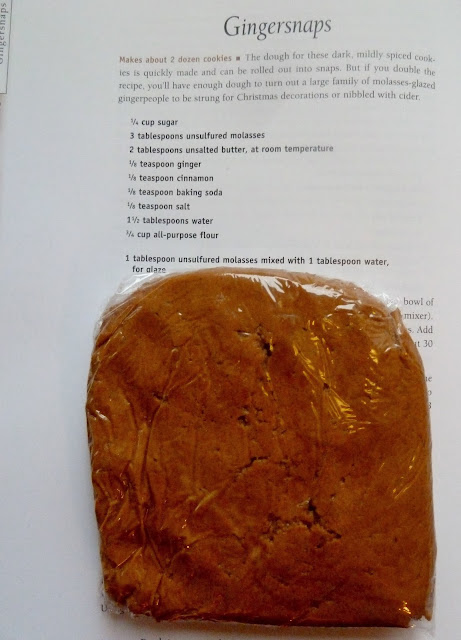 This is the entire amount of dough?
Seriously, that's it?
Surely, that isn't right.
Checking...
Nope, that is it.

I made another batch of the dough...'cause seriously this is a measly amount of cookie dough.  Generally, the recipes in this book make so much, but for some reason this recipe didn't. 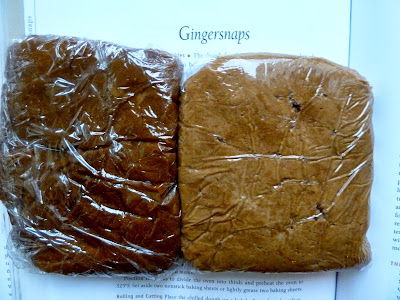 Anyhoo, for my second batch of dough I did it the same as the first, except instead of butter, I used coconut oil.
The dough on the left is the one with coconut oil.  I'm surprised at how much darker the dough is. (And it is also much softer.)
Should be interesting to see how they bake up. 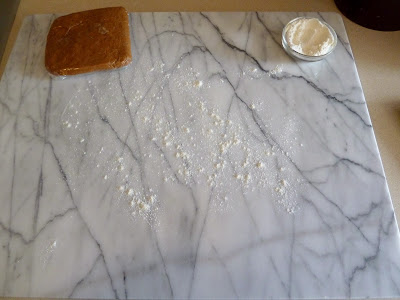 I left the dough in the fridge to chill overnight.  And today, I am ready to roll.  This dough is extremely soft and sticky. I started with the dough that I made with butter. 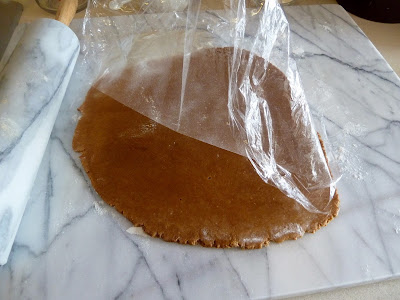 So instead of relying on a lot of flour, I rolled the dough under a piece of plastic wrap.  That really does the trick.
The second batch of dough (that I made with coconut oil rather than butter) was a much nicer dough to work with.  The dough was much stiffer and made it easier to roll.

I cut out a bunch of cookies, but wasn't actually able to get the cut outs off of the board due to the dough being too soft.  My plan was to put the cookies on a cookie sheet and put them in the fridge to chill before baking.  That's not going to happen.  And I don't think I'm going to be able to fit this marble board into my fridge.

New plan!  Taking the whole thing outside to Nature's fridge!!  (And whistling 'Always look on the Bright Side of Life'--thank you Monty Python.) 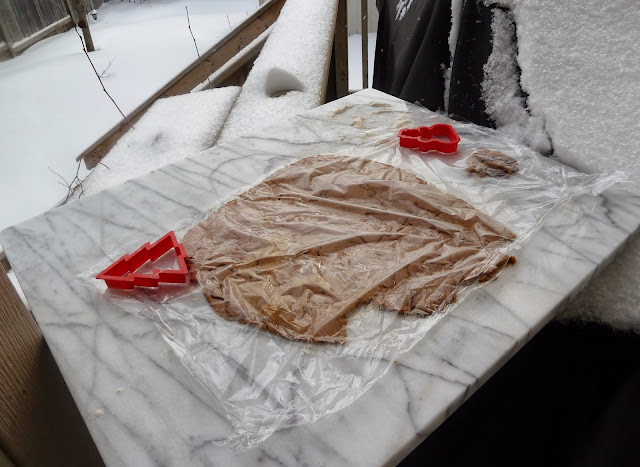 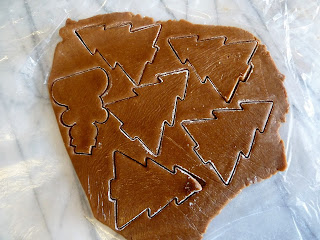 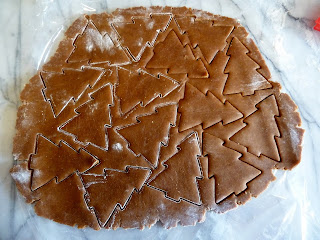 After the cookies get cut out, they need to be brushed with a mixture of molasses and water. 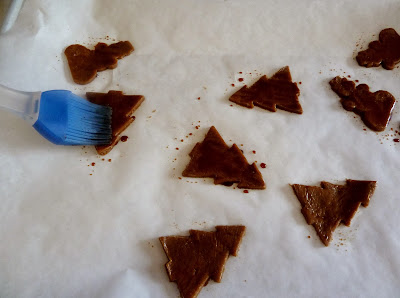 And now they need to be baked for about 7 minutes.

I don't know...I don't think 7 minutes is enough.  But the recipe says the cookies will crisp up as they cool.  Right now, fresh out of the oven they look a little puffy. 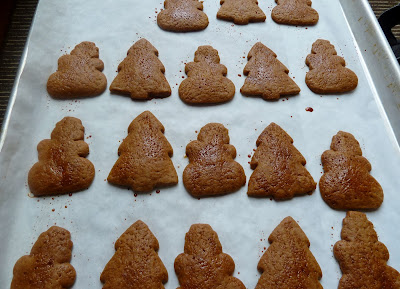 Nope, these really didn't crisp up.  And I didn't think there was nearly enough spice in these.  Very disappointed. 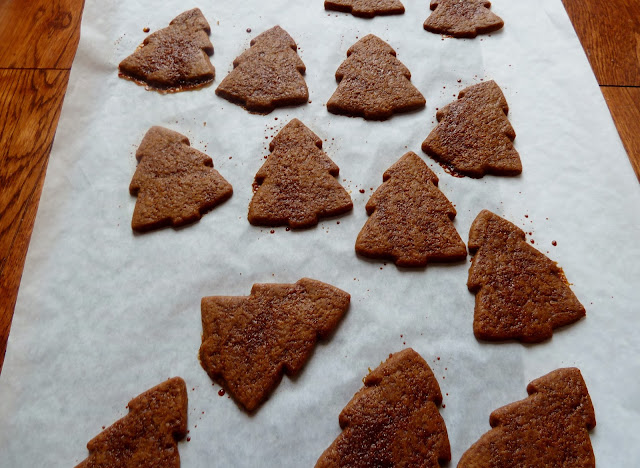 Just like me, these Gingersnaps have no snap. Perhaps my finger snapping ineptitude has carried over to my baking of Gingersnaps.  Or perhaps I need to find a recipe that is snappier.  To see how everyone else did with this recipe, head over to Tuesdays with Dorie.