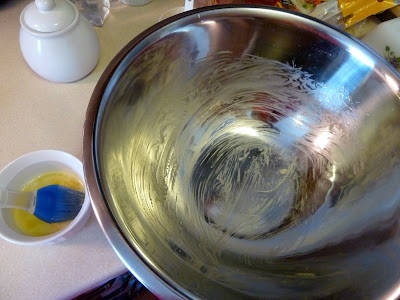 Too late for videos, bowl has been buttered.  This train is out of the station.  Train derailment on the 6pm news...stay tuned. 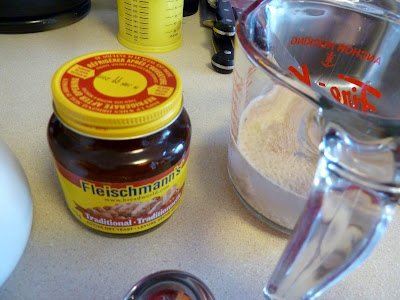 Yeast and sugar has been added to some tepid water.
Arrrr, the magic of ye yeast be brewin' in yer cup. (Thanks for noticing, Pirate Pete.) 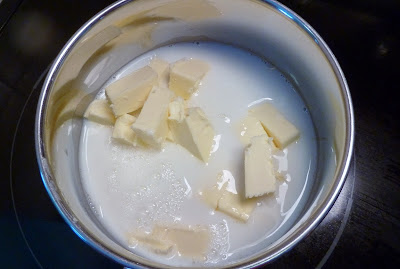 Next, the butter and milk get heated up (to melting). 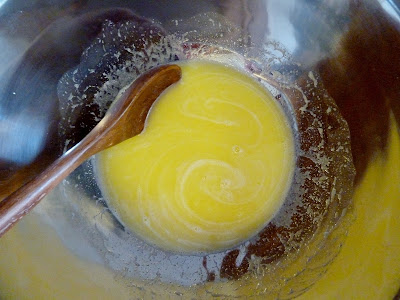 The melted butter and milk get added to a large bowl.  The remaining sugar, salt and honey get stirred into the bowl.  See, pretty easy peasy so far.  This train is chug, chug, chugging along. 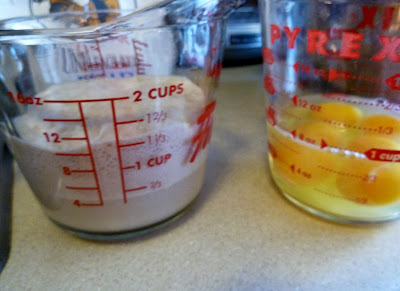 The last things to get added (before the flour), are the yeast (and just look how lovely that yeast is) and the eggs.
Arr, ye yeast has risen up like the Kraken from the depths of the ocean.  (Final answer Pirate Pete?)
Yarrr, tis me final answer.

So far so easy.  I almost didn't make this recipe.  I wasn't looking forward to the kneading bit (upper back is sooooo messed up this weekend), and there was no way I was going to subject my KitchenAid to that much hooking (dough hook, Pirate Pete...I'd use a dough hook with my KA).  It wasn't too bad having to stir a few cups of flour into the mixture. 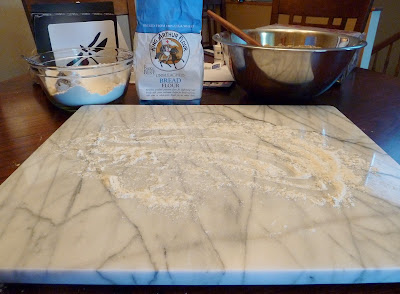 After a while, it became too hard to stir.  At that point, I tossed everything onto my new marble pastry board, which I put on the dining room table (which is lower than my counters) to knead the dough.
I am seriously smart.  SMRT!  This was so much easier on my back. 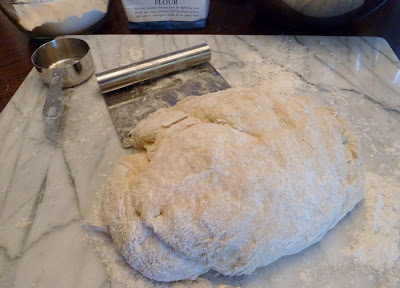 Have I told you lately, dough scraper, how much I love you?  Umm excuse me...trying to have a moment here.  <cough>
Such a simple kitchen tool. yet indispensable. 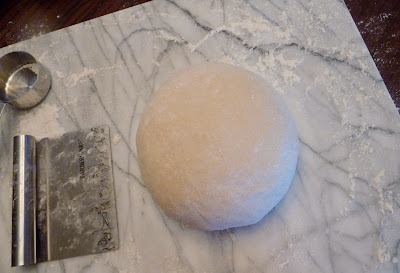 After about 10 minutes of kneading, I've got a lovely ball of dough.  This dough really was great to work with; so easy to knead.  I am going to take that as a good sign. 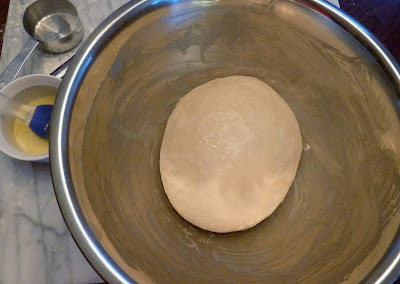 Into the buttered bowl goes the dough.  It gets buttered and covered up.  And I'll be back in an hour or so to check in on it. 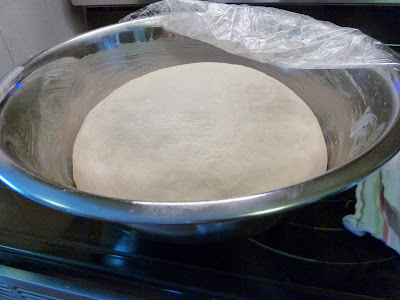 I proclaim this dough to be risen.  (And in way better light.)  This dough needs to be deflated and left to rise again.  Like the Phoenix rising from the ashes, this dough too will rise again...just with less ash and drama. 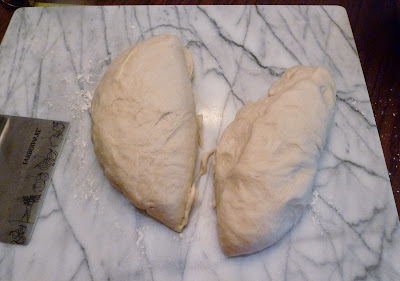 Second rising (of the dough).  Now it can be split into two pieces.

One piece I'll put aside (as this makes two loaves of bread). 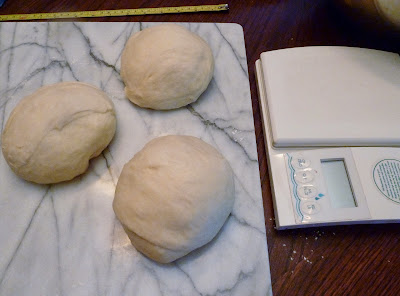 Because I am not so great with splitting things equally, I am using my kitchen scales to weigh out 3 equal pieces of dough (from the first ball of dough).
And yes, that is a tape measure in the background. 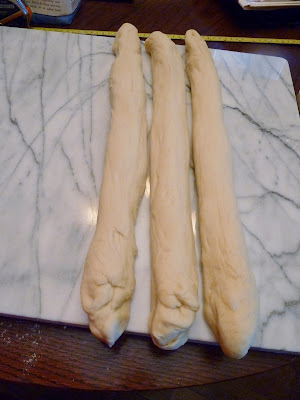 These three mounds of dough were then rolled out to form three wise men no, that's not right.  I made three long thingies....rope things.  Yeah.  Next came the tricky bit...braiding these together.
Seriously, how and why is braiding so hard to do??  Is it just me?  I feel freakishly incompetent when it comes to braiding.  It's almost embarrassing...until I think of other things I can't (or can and shouldn't) do. <insert sheepish grin here>


There we go, I kinda sorta braided them.  And I'm going to lie and say that I did not need to redo the braids at any point and gave up and this is the best I got.  Nope, not gonna say that. 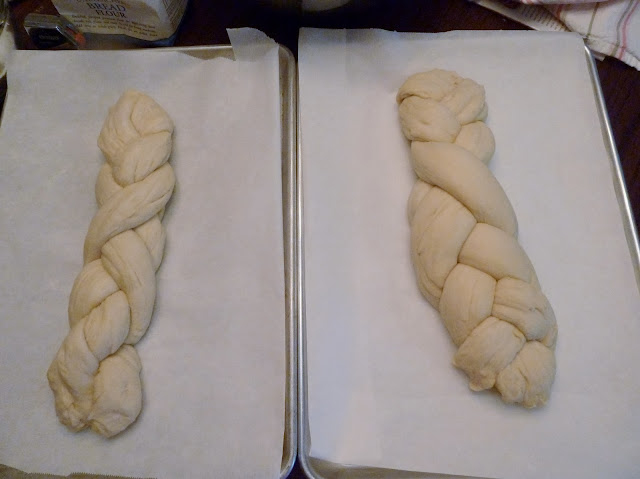 Next, the braids get brushed with an egg wash. (twice)  The first time, the egg wash gets to sink into all the crevices.  And then the second brushing helps to hold the course salt. 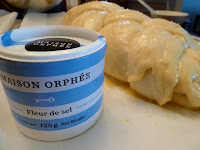 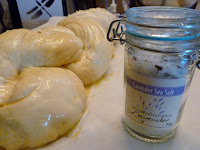 I used Lavender Sea Salt on one loaf and Fleur de Sel on the other loaf.  We have the option of sprinkling poppy seeds, sesame seeds or caraway onto them as well, but since I want to use these to make french toast, I am just adding a bit of salt. 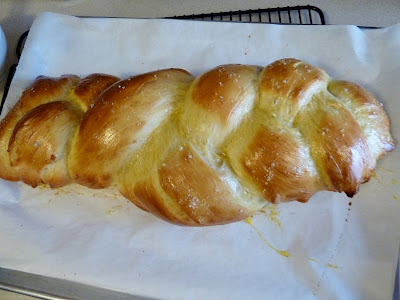 The bread goes into the oven for about 20 minutes.  Looking good so far.  As the bread bakes, it expands and exposes new dough.  This new dough needs to be brushed with the egg wash so that the bread gets an even browning.

And here are the finished breads.  Beautiful! 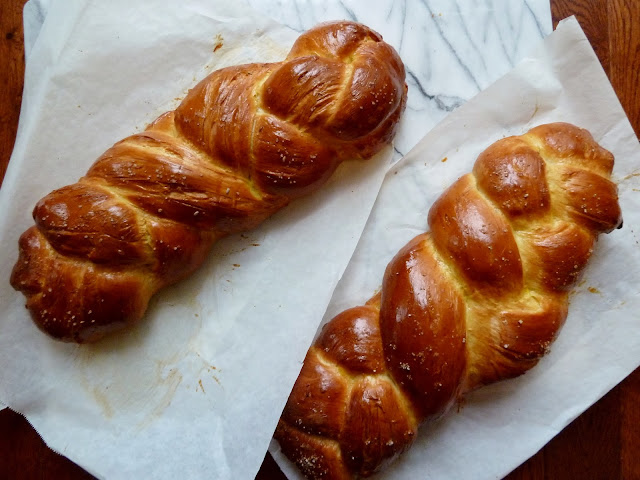 I do not have time to make my Baked french toast, so this bread is going into the freezer until I'm able to make it.  Sleep tight dear Challah, for soon you will be baked (french toast). 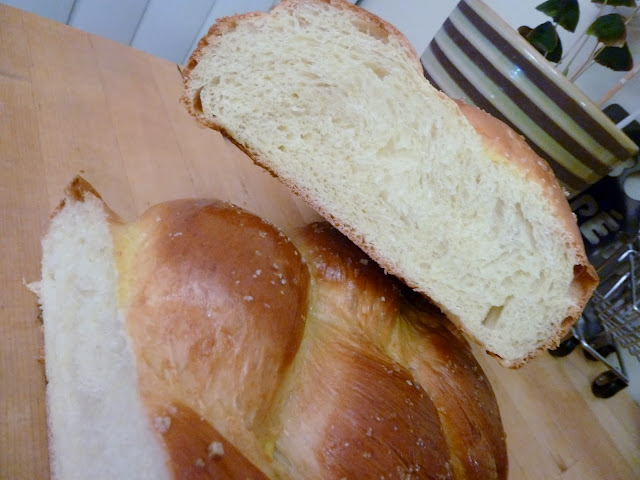