The ingredients seem so un-bread like....like instant espresso, unsweetened chocolate and prune lekvar to name three.    I know, right....prune lekvar??  What the freak is that??  Google to the rescue.  Prune Lekvar is just a prune jam.  Thank you, Mr. Google.

So I looked high and low for this Prune Lekvar.  No luck finding it.  But that's okay.  I just make my own.  It is just prunes and a liquid heated up and cooked until the prunes are softened and then pureed to a nice consistency.  I muddled my way through it.  You  know the old saying, 'when life doesn't give you lekvar, pout a little and then make it yourself'...or something like that.

I made the lekvar the night before I was going to make my bread.  Thought I'd save a little time.
So this morning I am ready and able to get this bread making process under way.  And an hour earlier than I had thought (yay to falling back in time...just not in a cool Dr. Who way). 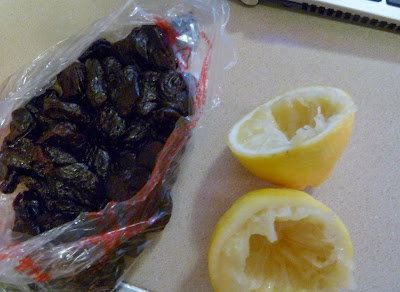 Here are my prunes.  I used about 2 cups of chopped prunes, 4 tbsps of lemon juice and the zest of the lemon. 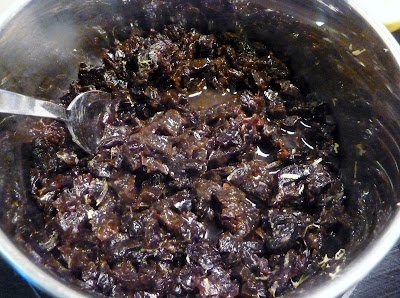 It all went into a pot and simmered over low heat for about 20 minutes or so.  Then I mashed it all up and added about a 1/3 cup of light brown sugar.  Easy peasy.  Once it was mashed up, I put it in the fridge until I was ready to use it (today). 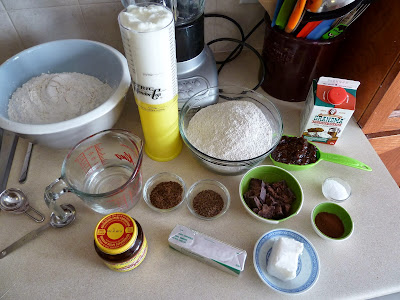 Like a squirrel, I've gathered all my ingredients.  A squirrel that can bake and doesn't just hide all her food in my garden, flower pots and grass.  (I know who you are!!)  Moving on...
I should have bought ground caraway, but instead, only bought whole caraway seeds.  This wouldn't be an issue if I had a spice grinder.  As it was, I tried to grind the seeds with my mortar and pestle...that didn't go so well.  I'm pretty much just using all seeds rather than anything ground.  Sigh.

The boiling water and espresso powder are blended together in a small pot. 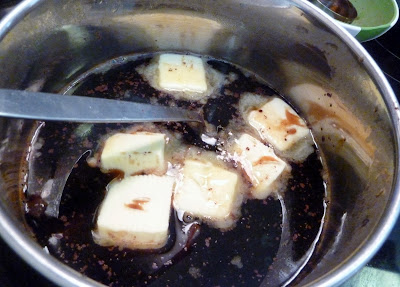 Next, butter and chocolate get melted in.  Then, the prune lekvar, shortening, caraway seeds, yogurt and salt get added to the pot. 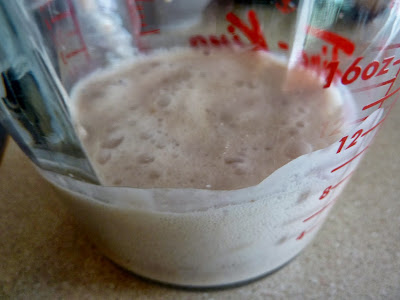 Meanwhile (back at the ranch), the yeast and a pinch of sugar get added to some warm water.  This gets all nice and frothy in about 5 minutes. 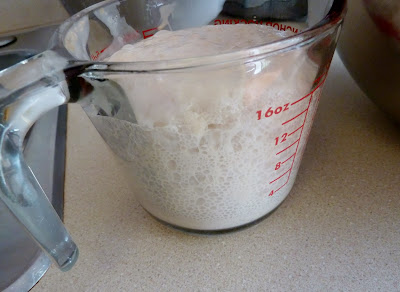 And then I turned my back on the yeast for two minutes, and this happened!!  Holy Yeast, Batman!
Hopefully that is a good sign, and not the sign of the Apocalypse. 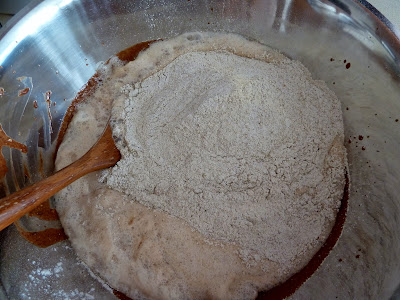 The yeast and rye flour get added to the earlier mixture. 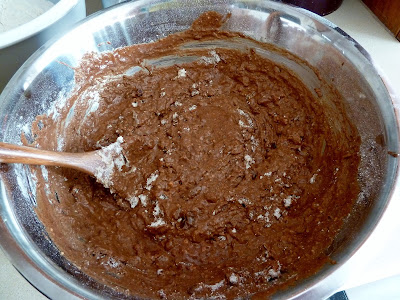 And with my big trusty spoon I incorporate the ingredients together.  This spoon and I can weather anything...even the Apocalypse.


After about 3 cups of bread flour, my arms have given up.  Seriously!!  Lauren Groveman has arms of steel!!  She really made stirring the bread flour into the mixture look so easy.  Argh...my arms are less Popeye more Olive Oyl. 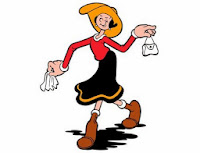 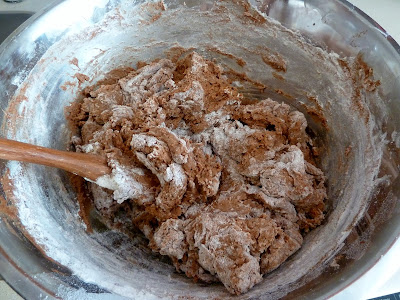 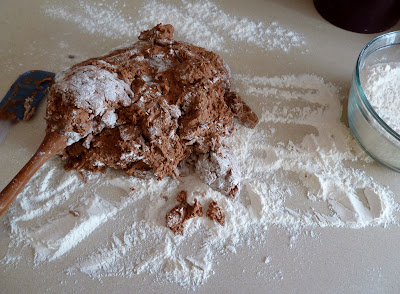 I tossed it all onto the counter and kneaded as much of the flour in as I could.  This really wasn't any easier than stirring the flour into the mixture.  The recipe does indicate that a mixer can be used for this process, but my KitchenAid isn't up for that challenge. 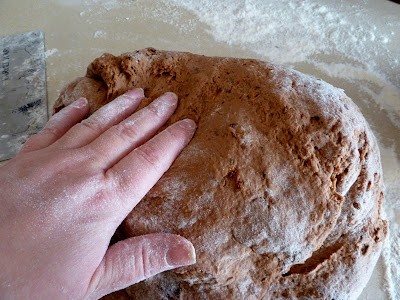 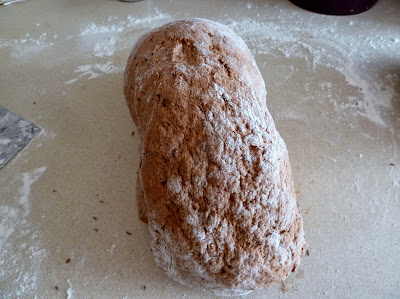 This is my "smooshing the dough together" test.  It should hold its shape and then slowly let go.  It passed.  (This makes more sense if you've seen the video.) 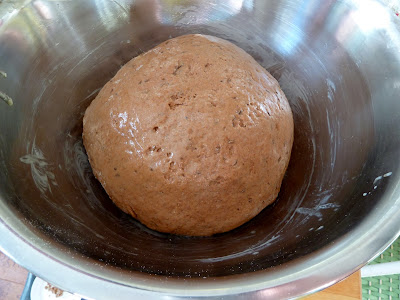 The dough is ready to be transferred to a large buttered bowl.  It gets brushed with some melted butter and then covered with saran wrap and a towel.
This will sit in a warm place for about two hours, or until it doubles in size. 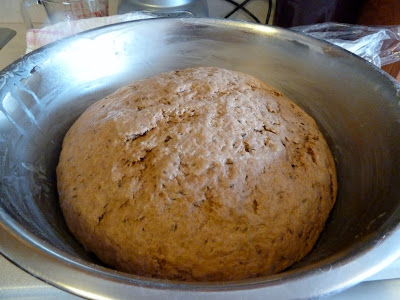 Two hours later, and it looks like this!  Beauty!
This then gets punched down and deflated. 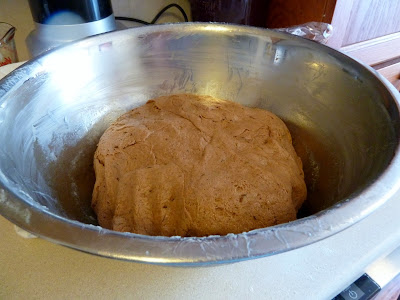 Back under the covers for another hour or so. 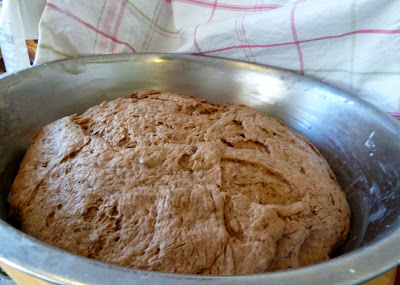 Here we are, after an hour.  Nice. 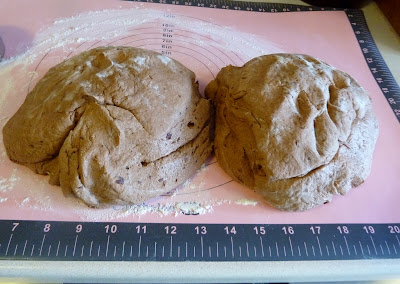 This dough then gets split into two pieces.  I will be making two loaves, not one gigantic loaf.  (But I could!) 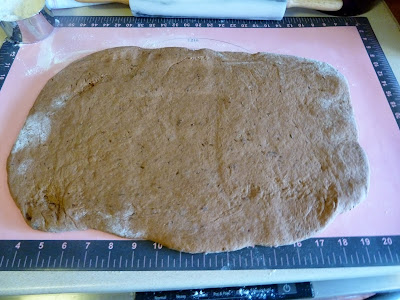 Each half gets rolled out.  And then the magic happens.  Yes, let's call it magic.  And please keep that in mind when you see things happening to the bread. 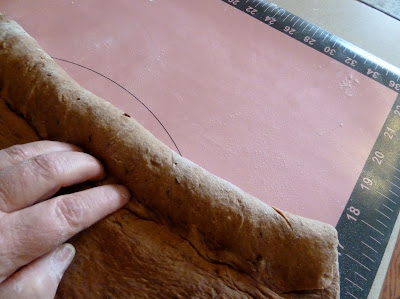 So again, thankfully I watched the video as I wouldn't have understood the instructions for this next step.  Roll and pinch, roll and pinch and repeat.  This is supposed to lower the risk of air pockets in the loaf.  Huh. 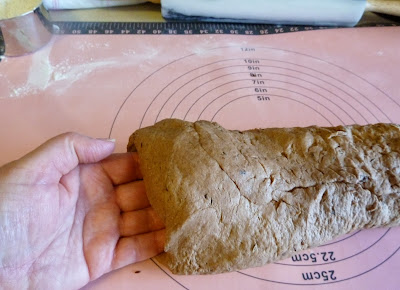 This next step seems wrong.  But I did it just like the video. (That probably doesn't make it any better.)
I'm tucking in the ends!  Yeah, it seemed wrong. 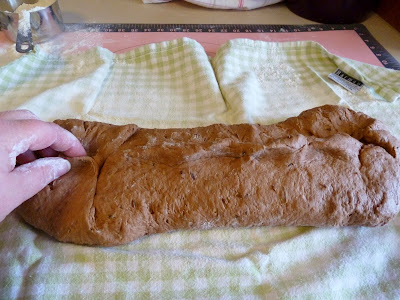 After all the rolling, pinching and tucking I think it looks okay.  And I'm pretty sure therapy isn't needed for this loaf now.  But wait, I'm now going to put it in a sling.  Yeah, I just said that. 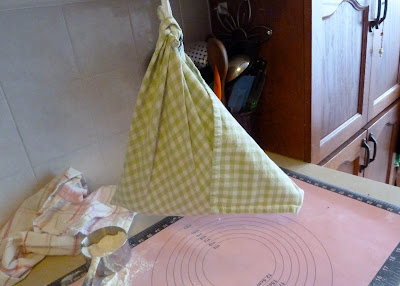 A bread sling.  Not something I ever thought would be in my house.  There's just so much I could say about this...but I'm just gonna move on. 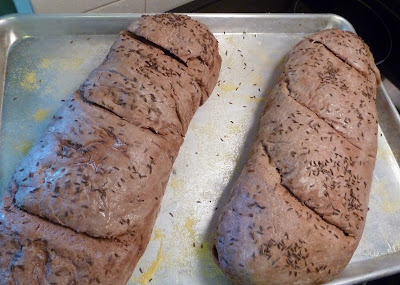 Oh hey, here's the bread ready to be put in the oven. 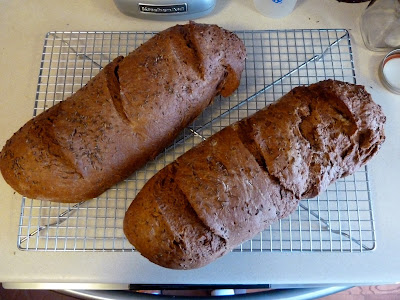 And here they are; fresh out of the oven.  Wow, it looks like I had some issues I should have worked out, BEFORE I picked up a knife.


Here I go...picking up a knife again.  I think I did better this time. 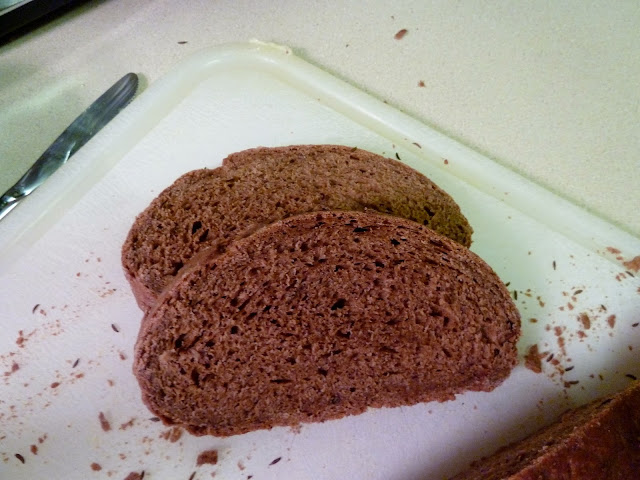 I think it turned out pretty darn good.  But it is still pumpernickel bread...a strong flavoured bread.  Not something I would eat on a regular basis. 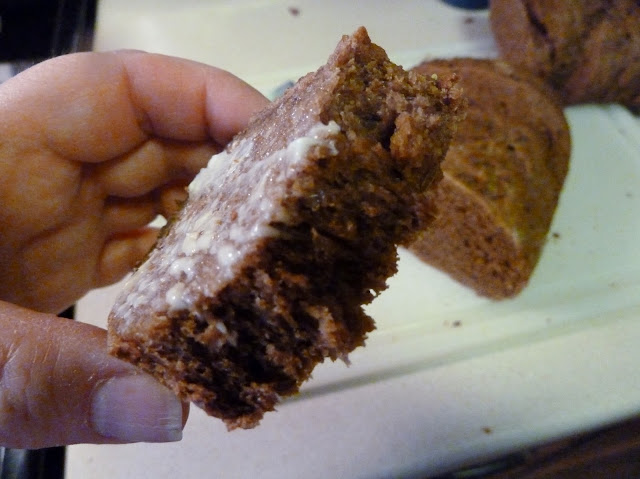 But I did it!  I made pumpernickel bread!  And I gotta say, I'm pleased with the results.  Head on over to Tuesdays with Dorie and see how everyone else did with this pumpernickel.