Yes, I am making pizza.  But not any ordinary pizza.  No Sireee....this pizza is made with the dough for pita bread.  How awesome is that!?  So I'm going to be making pita bread!!! (well the dough....and you know I gotta try using the dough to make pita!)  I'm very excited.  Probably more excited than I should be (that happens)....but dang it, I'm making pita bread, y'all!!! (And for some reason developed a drawl.)  I should make a slight correction.  I will be attempting to make pita bread.  I think it will be fine.  I've watched the video with Jeffrey Alford making pita with Julia and it looks pretty straight forward.  Granted, watching is always easier than actually doing.  But I am feeling oddly, surprisingly, naively, ignorantly, blissfully confident.   I'm just floating on a fluffy cloud of confidence. (And yes, these fluffy clouds were painted by Bob Ross)  Oh-oh...just had a thought.  Bob Ross made painting look very easy, but I know there is no way I could paint anything like he did.......hmmm....so maybe I won't have an easy time with these pita breads either, since Jeffrey Alford made them look so easy to make.  Wait, let me get back on my fluffy cloud of confidence....ahhh that's better. 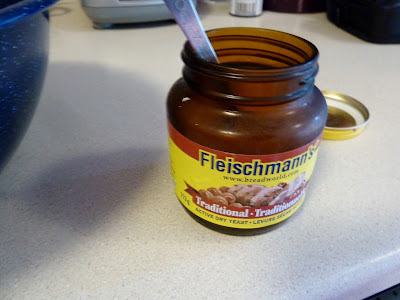 Before the pita bread can be made, a sponge must first be prepared.  Pretty simple stuff.....water, yeast, flour (whole wheat) gets stirred together and then that needs to rest for at least 30 minutes.  But 8 hours is recommended.
Now the only whole wheat flour I have, is bread flour.  I wonder if that will make a difference? 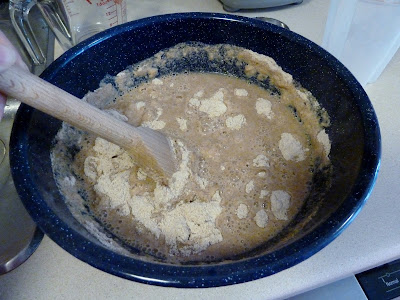 This mixture needs to be stirred about 100 times with a wooden spoon.  Just 90 more to go after this..... 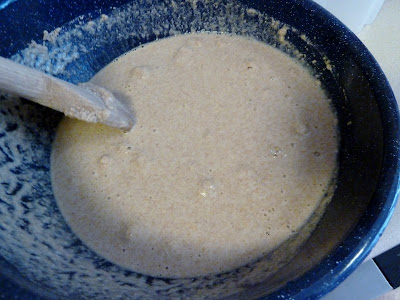 100!  And I only lost count twice.  Don't try to do anything else when counting.....like reading a recipe....or breathing.  I think more stirring is required.  Shh. 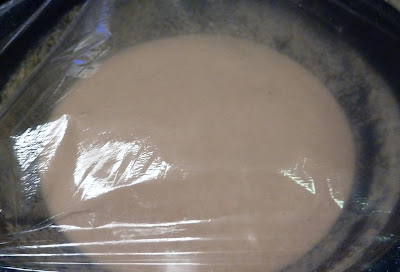 Half hour update:  The sponge has bubbles forming on top.  So it is going to be okay!!  (Because that is what it is supposed to do.)  Joy!  But I'm still going to let it sit for at least 5 hours...maybe 8. 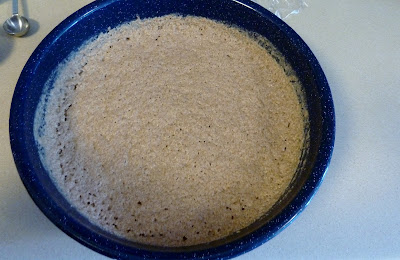 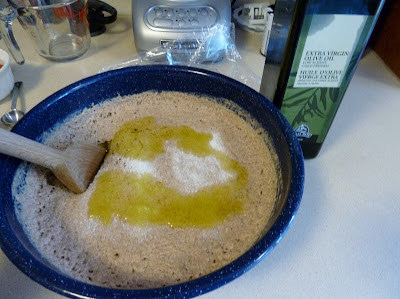 After more than 5 hours but less than 8, I added the salt and olive oil and blended it into the sponge. 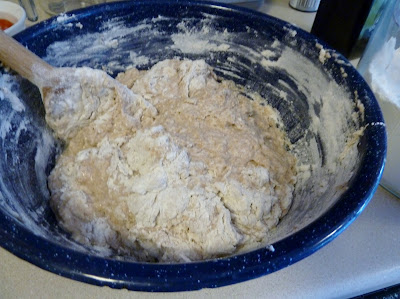 I then added the all purpose flour and did some needed kneading.  It feels like a really nice dough.  I did find that I needed to add a bit more than 3 cups to the dough though, as it is a bit humid here. 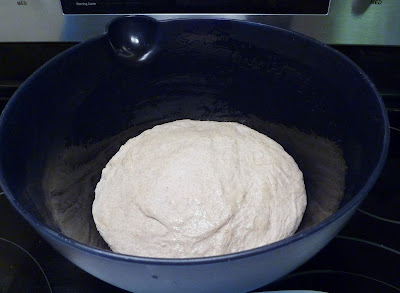 Now this dough needs to sit for 2-3 hours until it doubles in size.  I love bread....but I hate all the waiting.  ugh!! 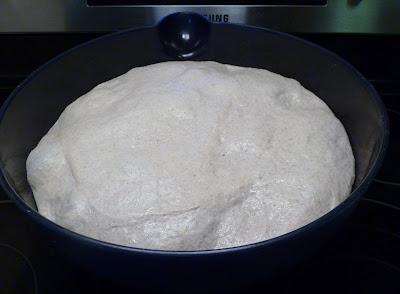 3 hours later and I've got this lovely bowl of dough.  Isn't it beautiful?!  Bread dough is so freaking amazing!!
I think this is going to make some good bread. (Fingers are crossed.)

I've decided not to bake with it after this rise, so I'm just going to put the whole thing in the fridge and come back to it tomorrow.


Day 2:  And now I think I'm ready to bake.  I am going to make the pizzas first (and later try my hand at pita bread....I'm not scared to try....I'm not...and I won't be thoroughly disappointed if the pitas don't turn out...). Cue sad Charlie Brown music.

I have left the bowl of dough on the counter to warm up for a bit, while I make the toppings for the pizza.  Simple little topping of ground lamb, shallots, garlic, allspice, cinnamon, tomatoes, salt and pepper.  The cinnamon and allspice certainly give it a nice flavour. 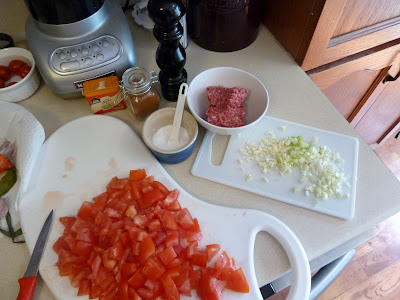 The dough is wonderful to work with...so nice and tender and easy to roll.  I just took out enough
dough to make 4 little pizzas.  The rest of the dough is going to go back into the fridge until later, when I have time to try making pitas. (Which for the record I am not afraid to try.) 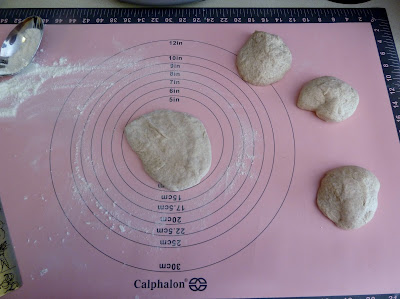 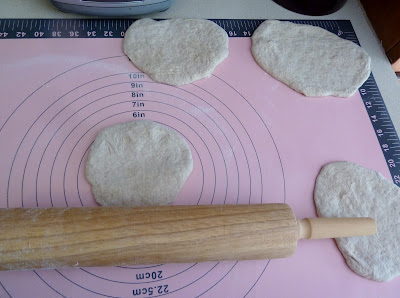 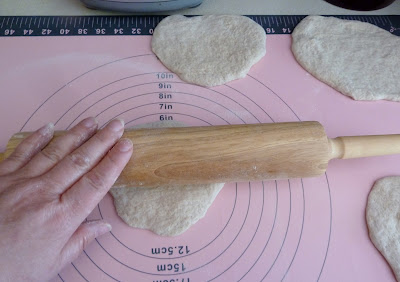 The first two pizzas I made; I just used the lamb topping with the recommended pine nuts sprinkled over top. 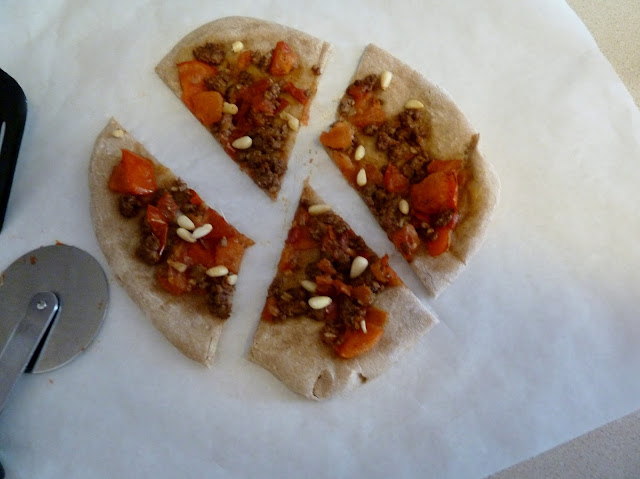 For the next two pizzas; I did the same, except I also added some feta cheese.  (Cause everything is better with cheese.) 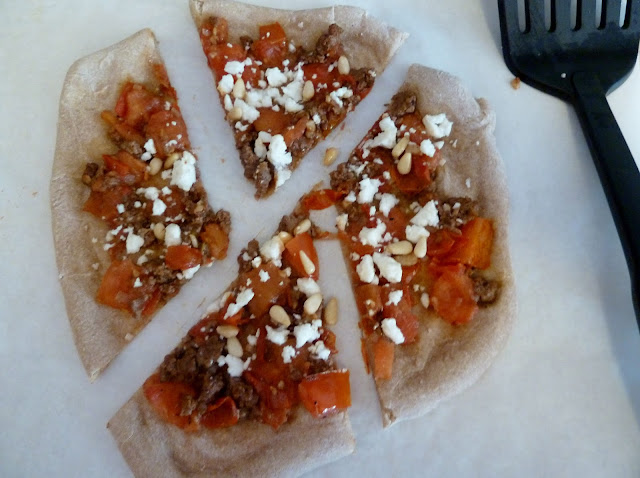 The dough bakes up nicely and is a perfect compliment to the tasty topping.  I am really impressed with this dough.  I think I'm over my fear ready to make pita since this dough seems just fine.

I had my Rocky moment in the kitchen (when my pita breads turned out) well except for the running part, and the adoring fans/kids part, the leaping park benches and the running up monument steps part...but besides that, very Rocky like.  Could have just been me humming the theme song and jumping up and down.  (No further questions, please.)

So yeah, my pita breads turned out.  And I am beyond pleased about it!  Beyond!!! 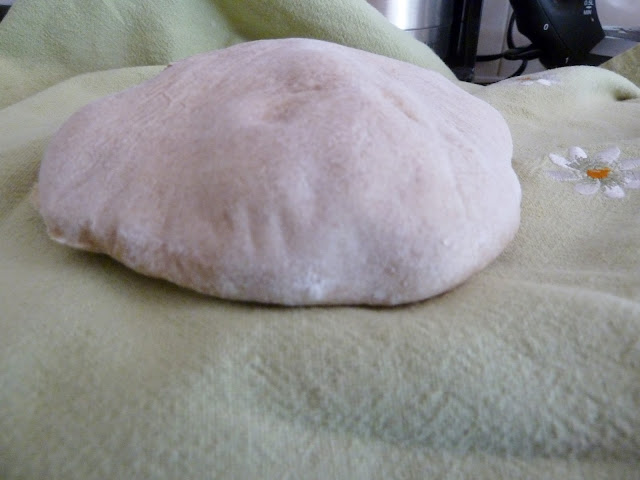 ﻿
It is just an amazing thing to watch.  A flat disk of dough put into the oven puffing up into a beautiful pita bread! 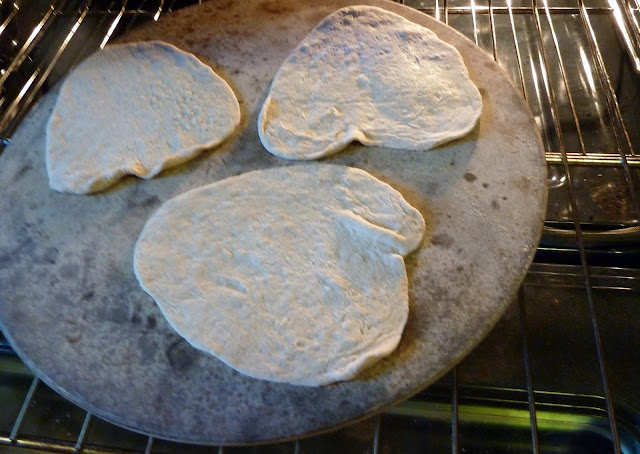 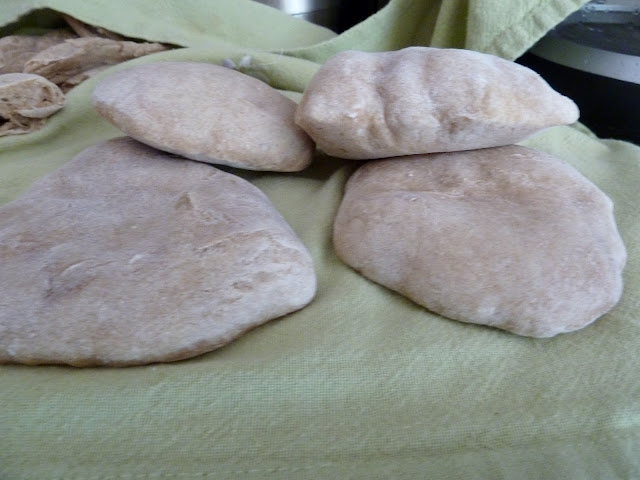 Just out of the oven and stacked up. 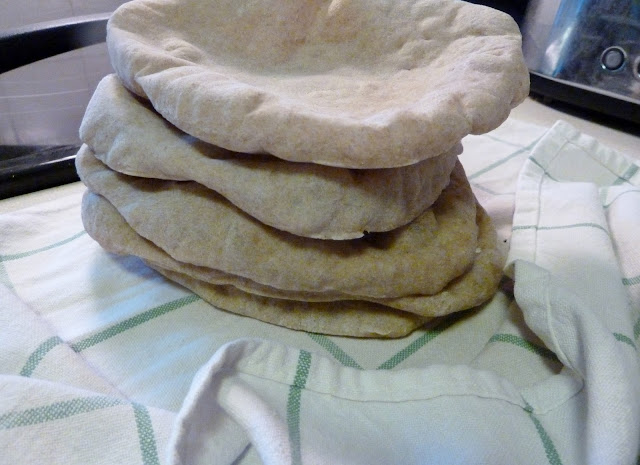 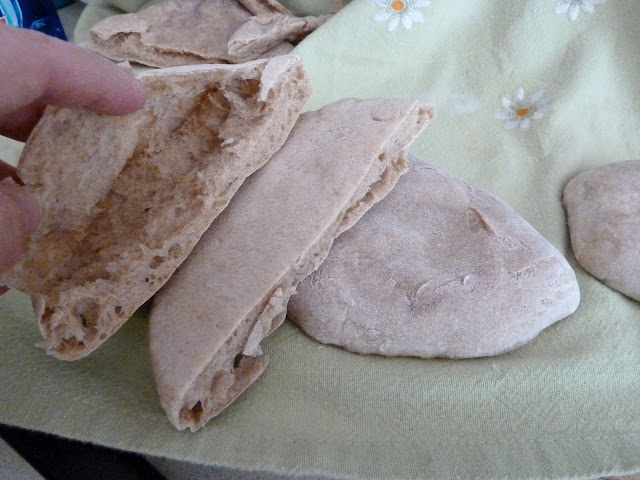 So, this was a total success and I'm pleased as punch! (Punch the drink I guess...since a punch is not pleasing.)  Or do they mean Punch from 'Judy and Punch'?  I could google it, but I'm too busy being pleased as pita!