This week's recipe from Baking with Julia, is a Baked Yogurt Tart.  Well sir, that sounds pretty good.  And I think I have some of the flaky pastry dough in the freezer.  I'm pretty sure it is the same dough we used for the Apple Tart...though that was a few months ago.  Wait, that was way back in January.....yeah, just might have to make a new batch of the flaky pastry dough.  Or maybe I could use the pastry dough we used for the Tomato and Cheese Galette.  Probably not, huh.  Yep, I think I'm going to have to make some dough....d'oh!

Making pastry dough is not one of my favourite things.  Julie Andrews never sang about it.....so she obviously wasn't a fan either. 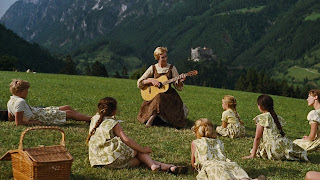 And it isn't that I hate the process of making it.  I just dislike the uncertainty....will it turn out....won't it...will it take a jack hammer to cut through the crust??  Questions like these haunt me when I make pastry dough.  Granted, I don't make it very often.  And practice make perfect, or perhaps it just makes for crazy (when it keeps NOT turning out).  Am I rambling on, so I can put off the making of this pastry dough?  Some would say 'yes', others would say 'sorry I tuned out after the Julie Andrew's reference'. 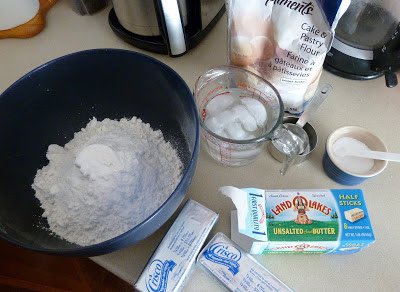 These simple ingredients are all that is needed to make a perfectly flaky crust.....well that and skill and a pinch of luck and a smattering of voodoo.  I'm sure there is voodoo involved to make good pastry dough. 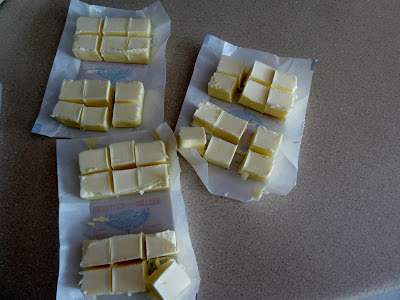 Or maybe my perfectly cubed butter will be all I need to make a flaky pastry dough.  Ain't they Purdy!  Butter is beautiful, people!! 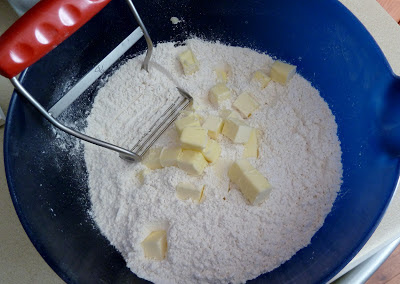 Cubes get cut into the flour mixture. 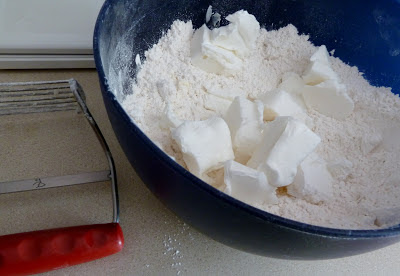 Then shortening gets cut into that mixture. 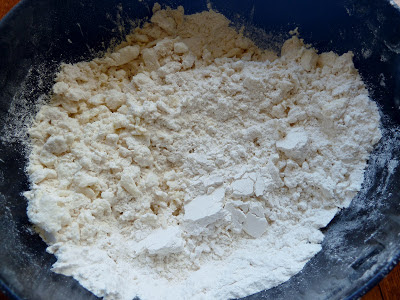 And finally, we have this crumbly mixture with lots of butter and shortening bits.  (These are the bits that will make this pastry dough into a flaky crust....well that and the chill of the fridge...followed by the heat of the oven...but you knew that already didn't ya.) 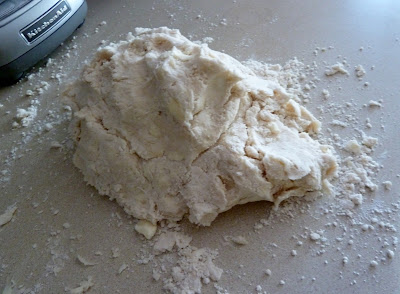 The dough then gets turned out onto the counter.  The next part is what can turn a dough into a flaky crust or a tough crust. 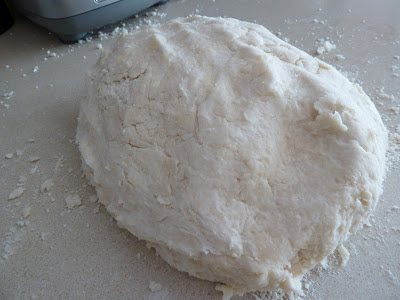 The dough gets kneaded for a few turns(gently so as not to melt the butter).  It is now ready to be chilled in the fridge.  I left it overnight. 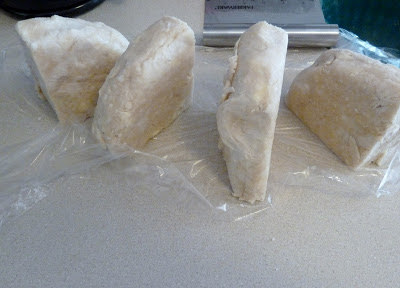 The next day the dough is ready to be divided into four portions.  For this recipe, I only need a quarter of the dough.  The rest with be put into the freezer and I'll (hopefully) use another time. 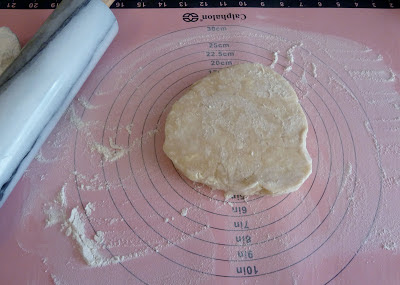 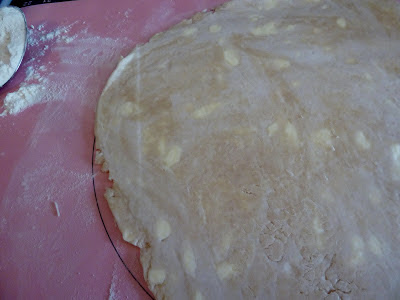 Butter.  Butter also makes a flaky crust.  And look at the butter dotting this dough.  It has to turn out!  It just has to, Toto!


I watched the PBS video with Leslie Mackie to see how she made her pastry dough.  I have been finding that this helps to understand a recipe better.  There are two parts.  Part one.  Part two.  I watched both and enjoyed seeing her tips on pastry dough. 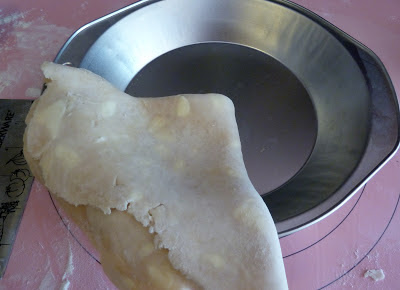 I learned to fold my dough into quarters to make it easier to put into the pie tin. 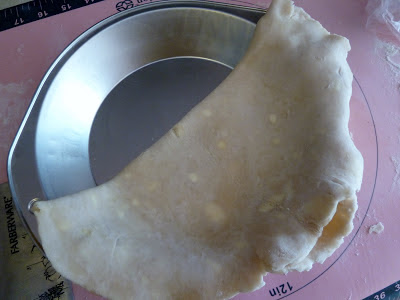 And then it is just a matter of unfolding it into half of the pan....


and then unfolding to cover the whole pan and then fitting into the pan.
Wait a minute....that's not the pie dough. 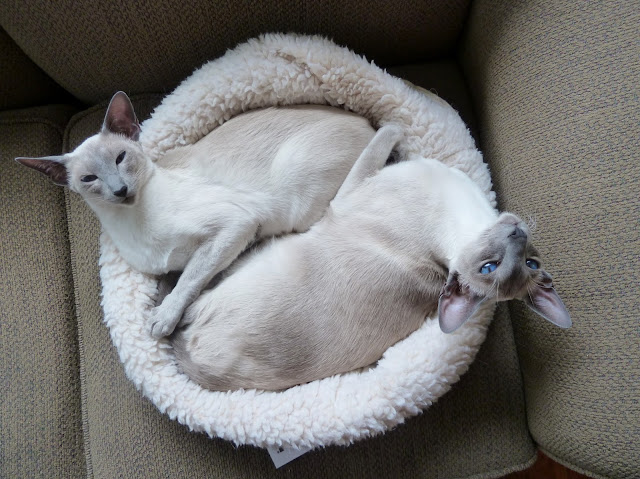 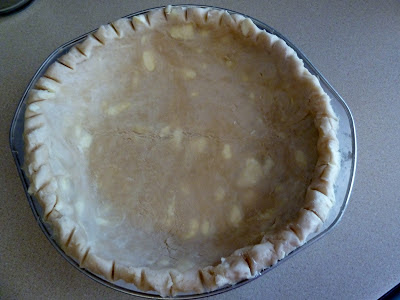 Here we go then.  Granted, it isn't going to win a beauty pageant....but I find Pie Doughs rarely (and by rarely I mean never) win Beauty Pageants.  Not sure why....well other than the fact that they'd never find a bathing suit to show off their butter dots.  That's just fact, people. 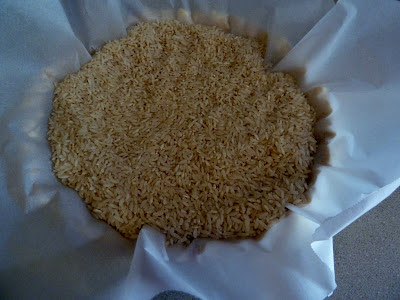 Into the oven this goes (after a 30 minute chill time in the fridge).  The dough gets lined with parchment paper and then filled with rice or beans or something to weigh it down.  This way, the dough doesn't puff up.

While the baked pie crust was cooling on the counter, I started putting the filling together. 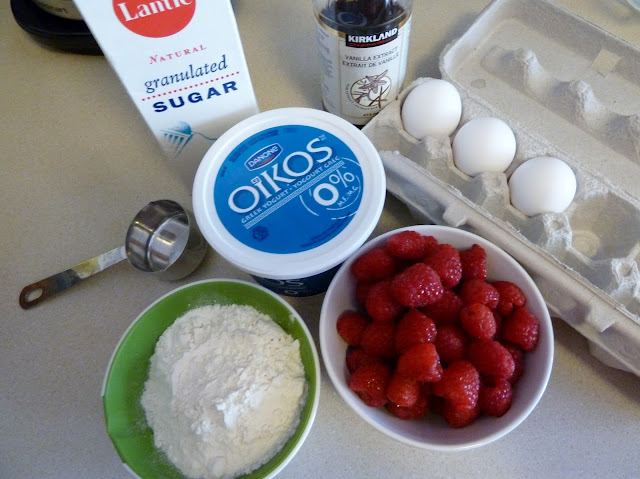 These ingredients combined to make this thick filling. 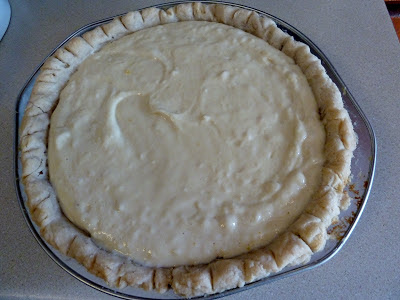 Which I then topped with the lovely raspberries.  This went into the oven for about 40 minutes. 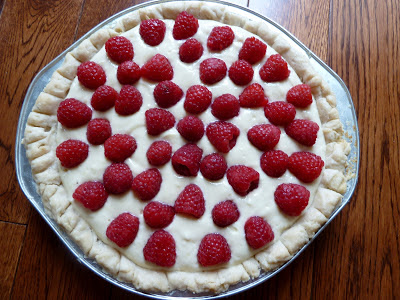 Lots of time to reward my kitchen helpers with a spoonful of yogurt.  They helped by staying out of the kitchen! 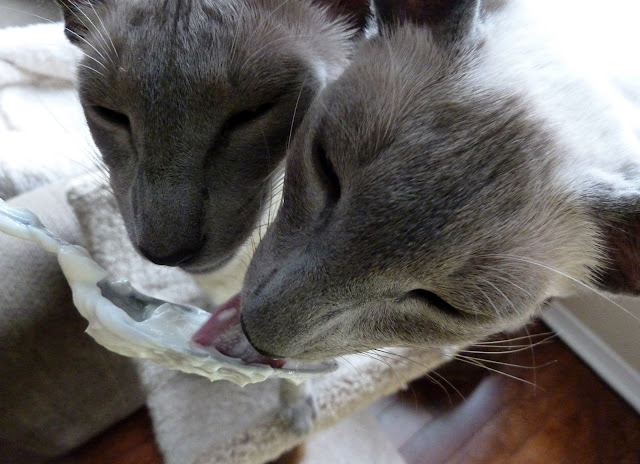 Here it is fresh out of the oven.  I guess I was thinking it would brown on top, but it really didn't.  It is set, so it is definitely baked through.  It really doesn't look all that different from when it went into the oven.  (I'm not judging...just saying.) 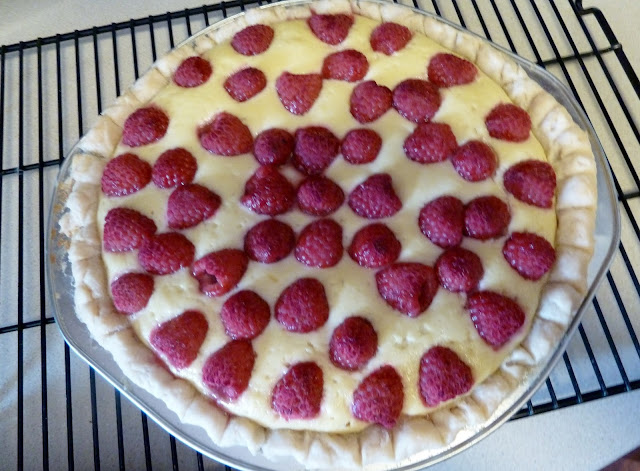 And here it is now cooled down and easily sliced and plated. (whew)  Not that I was worried that it wouldn't come out of the pan and I'd be laughed at...Carrie Style.  (Stephen King, Carrie, Not Sex and the City, Carrie.) 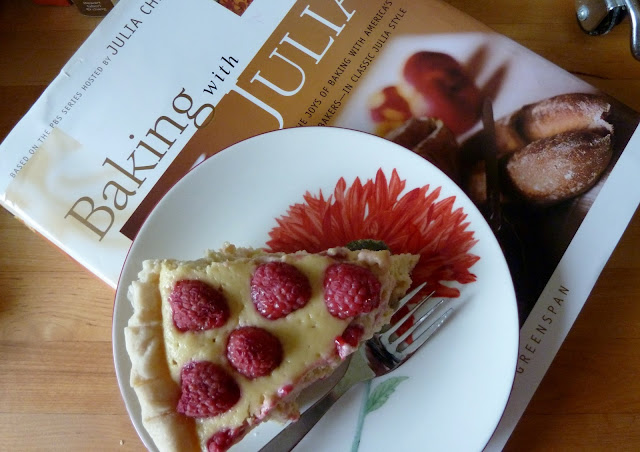 This was good.  I really enjoyed the cheesecake like texture of this tart.  I like cheesecake, but I don't love it.  I find cheesecake a bit too rich and cream cheesy for my liking.  But this Baked Yogurt Tart is light and fluffy and understated (read: not cream cheesy).  The raspberries bring a fresh sweetness to the tart.  I would make this again, perhaps try strawberries next time.  I didn't add the almonds, as I didn't think it needed anything else.  My crust turned out beautifully......flaky and buttery and no jack hammer was needed to cut into it!  Win-Win!