I clearly thought I had another week before this was due.  It is Monday night and I am just making this recipe now!!  Ack! 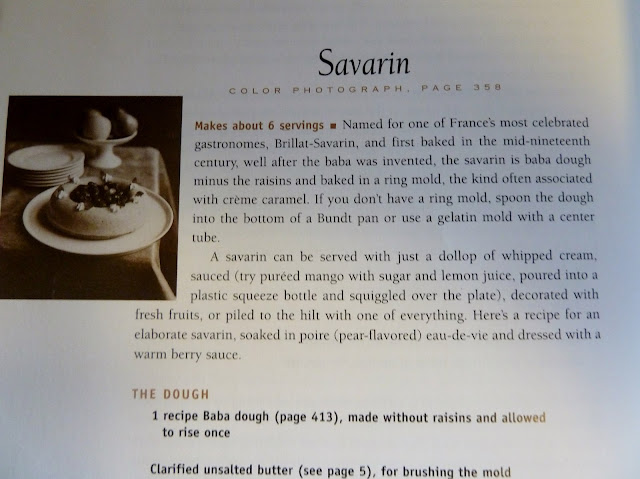 Luckily, the recipe is fairly simple for the dough.  And not a lot of resting time which helps too.  It really is a simple dough. 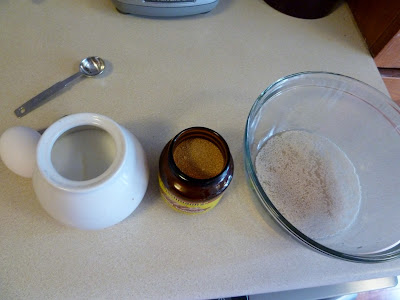 A little water, yeast, sugar and an egg....this gets a quick mix with a rubber spatula. 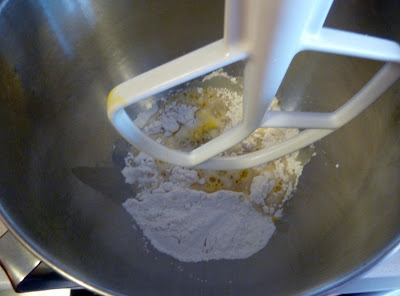 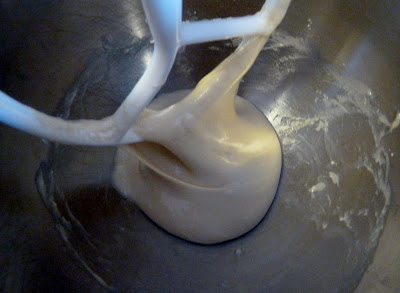 This dough only needs to sit for about 15 minutes....enough time to butter my molds. 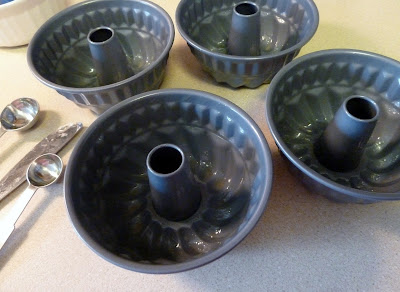 I do not have a savarin mold, so I thought I'd use 4 mini bundt pans.  Should be fine.  Oh and I didn't use clarified butter to brush the molds.  (Shhh don't tell anyone.)


It certainly helped to watch the video on PBS before starting this recipe.  I am trying to remember to do that before I start these Julia recipes.  (This is actually the first time I watched before I started...yay me!)  I wish I had done that with the croissants!  I sometimes find the recipes in this book a little confusing.  And then of course when I watch the video (after I've made the recipe) it makes sense what the book is saying.  I'm pretty sure the 'Ah ha' moment is supposed to come before not after....meh what are ya gonna do? 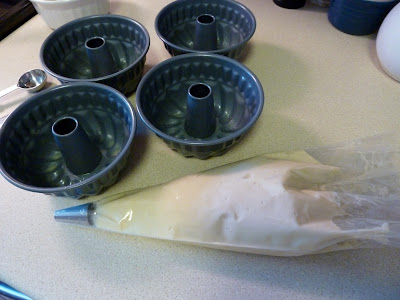 The video shows the dough being put in a pastry bag to fill the molds.  So I thought I'd do that as well, as the dough is really sticky and I think would be a challenge to fit into a mold. 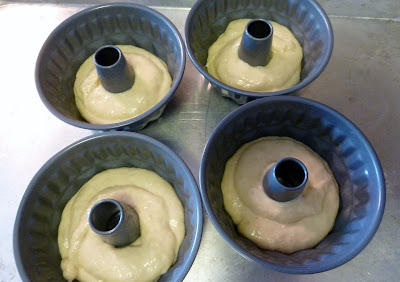 I think my dough is okay, as it seems to look like the dough in the video....and it made the same noise when being squeezed out (Not sure if noise of a dough is any indication of how it will turn out, but I'm going to use it and say this dough is right.)


Right now they are rising for a half hour.  Really hoping the dough rises.  I would cross my fingers, but it is surprisingly hard to type with crossed fingers.  Guess that is one baking technique I won't be able to use today.

Yay, the dough is rising!!  Just checked at the 15 minute mark and it is looking good.  Whew!   Not that I was worried. <cough>  It is really an interesting dough.  I cannot believe how elastic and spongy it is.  I can't wait to see how it turns out once baked. 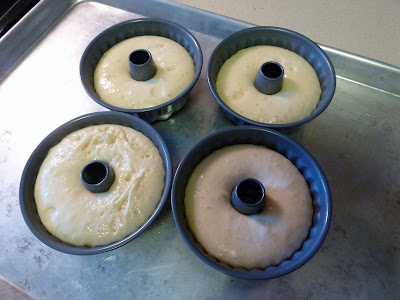 Okay, half an hour later the dough has risen quite nicely.  I'm very pleased relieved that it did actually rise.  Whew!  Not that I was worried. <cough>  Really should have that cough looked at. <cough> 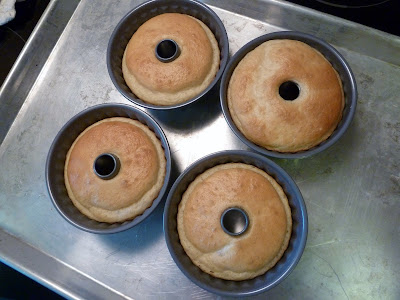 Much prettier, once I flip them out of the pans.  Ahhh...they're adorable!  They remind me of crullers(doughnuts). 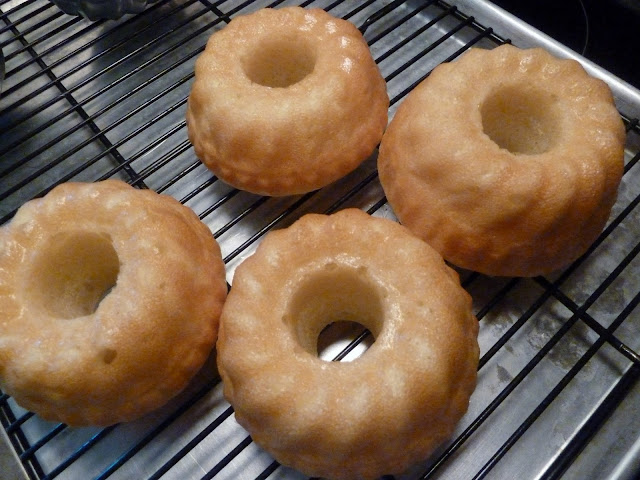 Since I watched the video for this recipe, I see that I don't need to make the soaking syrup.  Instead, David Blom suggests soaking the little cakes in a liquor.  I decided to use my Appleton's Rum for one and Chambord Black Raspberry Liquor for the other cake.  (I have put the other two little cakes in the freezer for a later use.)

So this one is soaked in the rum and garnished with mangos and whipped cream. 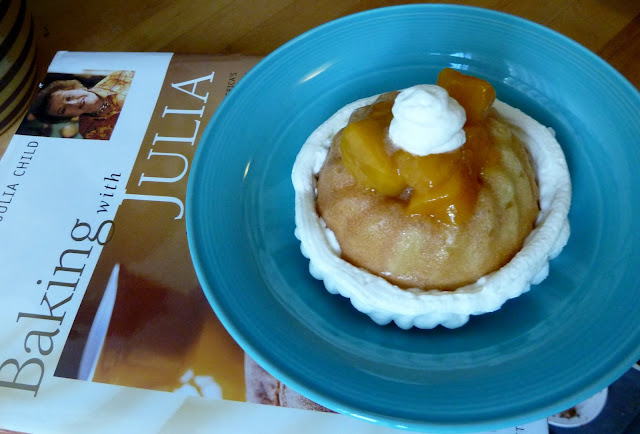 And this one is soaked with the Chambord and garnished with berries and of course whipped cream. 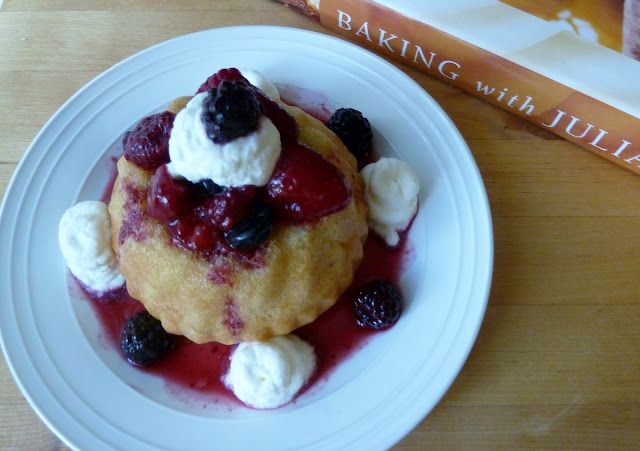 These were interesting to bake.  I enjoyed the simplicity of the recipe for sure.  There are so many things they could be garnished with.  Next time I would be more liberal with the liquor when soaking the cakes, as I don't think I put enough on the cakes.  It was a tasty dessert and I would definitely try again.  The dough is amazing and I look forward to trying it again so that I can make the Babas. 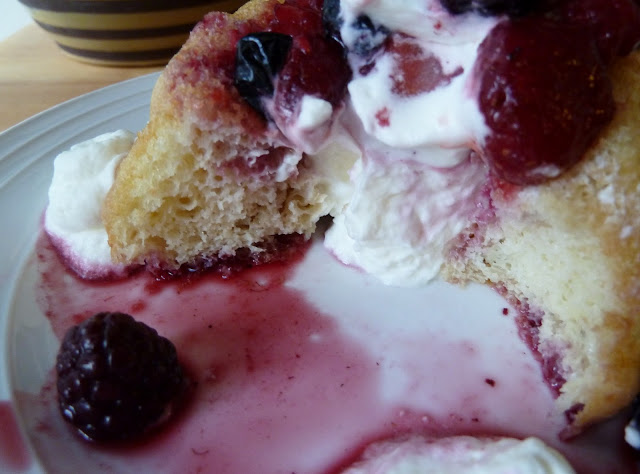