Okay, I am not sure why these TWD posts keep sneaking up on me.  Again, I was sure I had another week.  At least this time, I've still got a few days before this post is due.  (Thank goodness for weekends!)

The  galette dough looks fairly simple.  Let's be clear though.....I don't find any pie/galette dough simple.  The reading of the recipe makes it seem simple though.  I like that there is cornmeal in the dough, so maybe that means it won't be fussy (tempermental).  <finger's crossed> 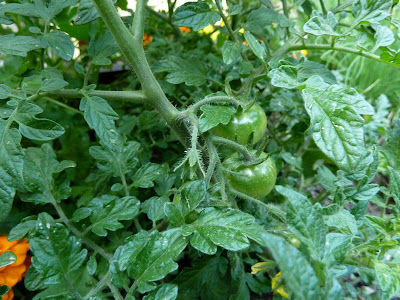 Hopefully I can find some good tomatoes....though it is still early in the year, so they may be hot house.  But I will check out some farmer's markets to see if perhaps there are some early tomatoes out there.  I do see little tomatoes on my plants.  But they are cherry tomatoes and still green.  I'm so excited that they are growing and I haven't killed them (yet)!  I'd say all the rain has been helping with that.  And my herbs are all growing nicely.

Back to the recipe at hand.  Will find tomatoes (my personal mantra....at least until I find tomatoes).  A good reason to go out to the farmer's markets!  The Carp Market is great and proabably my favourite market to go to (in Ottawa).  Though I have been to the Kanata Farmer's Market and it is getting bigger and bigger and is a lot closer.  I just like farmer's markets in general, at least the ones that have actual farmers that grow their own produce.

So perhaps I should start with making the dough.  If I make it ahead of time, I can keep it in the fridge until I get the tomatoes.  I shouldn't put off the dough making any longer.....right?  Be brave.....be the dough!  Oh darn it....I don't have sour cream....saved from dough making for another day. <insert sheepish look> 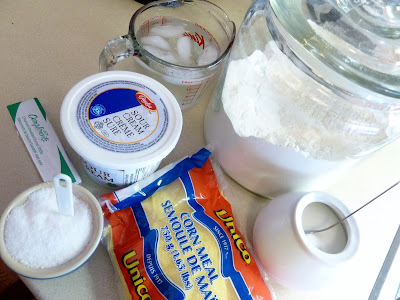 Shopping has been done...sour cream is in da house!  Let's get this dough made.  Ingredients have been assembled....a hush falls over the kitchen.  Cut!  Cut!!  Who meowed?? 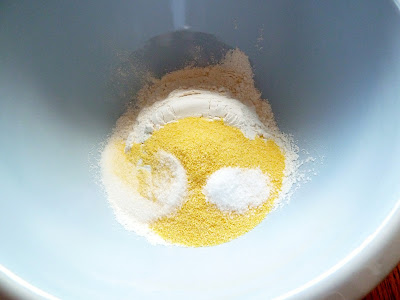 Flour, cornmeal, salt and sugar are put into a bowl. 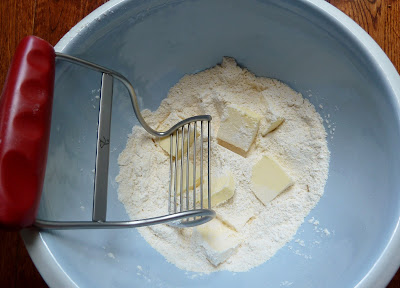 The butter pieces get tossed into the flour mixture before being blended with the pastry cutter. 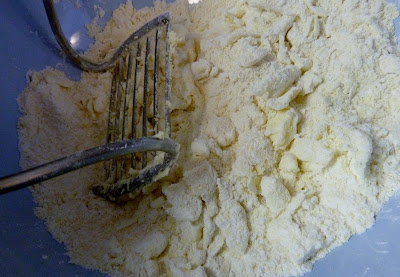 I could have pulled out the food processor to bring this dough together, but I didn't feel like going to that bother when a simple pastry cutter could do the same thing.  Here the butter has been cut into smaller pieces.  After this, it was just a matter of mixing in the sour cream and ice water to make the dough.  It seems like such a little bit of dough.  I even re-read the recipe (sure that I had forgotten something....like another cup or two of flour) but this was all it was supposed to make.


The dough is divided into two portions and then put in the fridge to chill for at least 2 hours.  I figured I would let it chill overnight and make the galette for lunch the next day.


The dough has been chilling in the fridge overnight.  I'll leave it on the counter for a few minutes to warm up, so that it is easier to roll out.  I guess it will be a relatively thin crust, since it is just a little bit of dough.  (Still not sure about this small amount of dough.)  The dough feels so nice.  I am not a pro with making pie doughs, but I think if it feels this soft it should make for a nice galette. 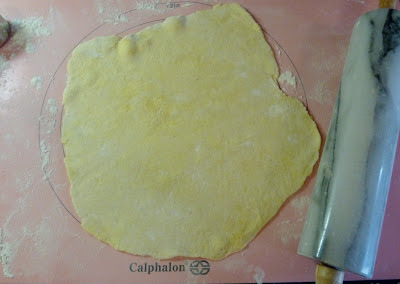 It was very easy to roll out.  I did need to keep throwing down flour so that it wouldn't stick to the mat and rolling pin, but other than that, no problems at all.
I really believe that this is going to be a good galette.  This dough cannot be a loser....it just can't.  My previous dough making has not been good, but this dough is so easy to work with, I'm betting it will be a winner. 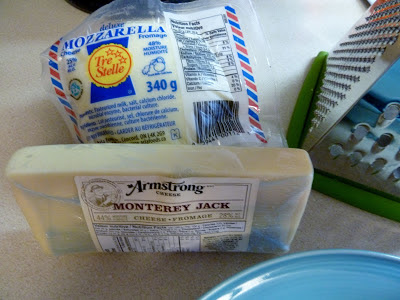 Next I move on to the fillings.  The cheeses used are Monterey Jack and Mozzarella. 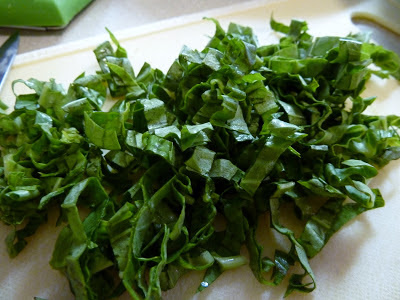 The basil gets a chiffonade.  (Think of it as a friendly shiving.)  No? 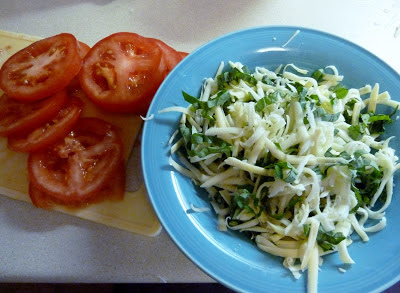 Tomatoes get sliced.  Cheeses are combined with the basil.  My filling is ready to fill.  Let's do this! 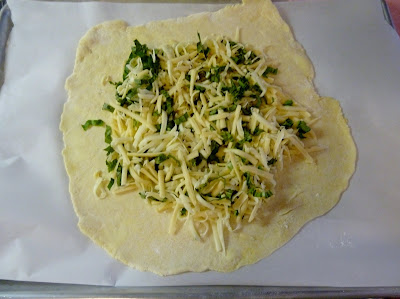 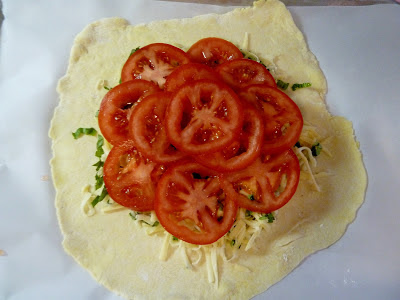 Then the tomatoes get layered on top of the cheese.  So purdy! 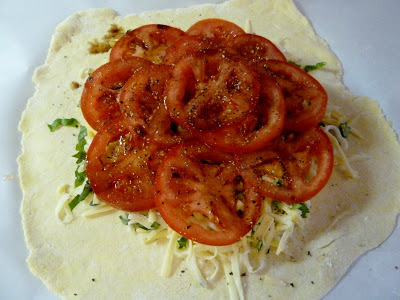 I decided to also sprinkle the tomatoes with same course salt, freshly ground pepper, olive oil and balsamic vinegar.  (Just to give it a little somethin', somethin'.)

Now I just need to fold the dough over the top in a pleated manner.  What?  Pleats?  Didn't those go out of style in the 90's?  I went with large pleats....only because I didn't really catch on to pleating dough.
How freakin' cute is that!!??  This is just too darn cute NOT to turn out!!! (Sending out a silent prayer to the pastry gods.)  And now that I'm looking at it, I think it would be so cute to make mini galettes...but alas, it is too late.  (Will think about it for the second portion of dough.) Now into the oven my pretty, for 35 minutes.  That seems like a long time.  I will keep a watch on it just in case.
Nope, it was not too much time.  Goldilocks has declared that it was just the right amount of time!
The cheese got all bubbly and the crust browned up nicely.  It really is a beautiful creation.  I love that rustic look and oh my goodness, it smells divine!  Can you hear that?  Are those angels singing?! 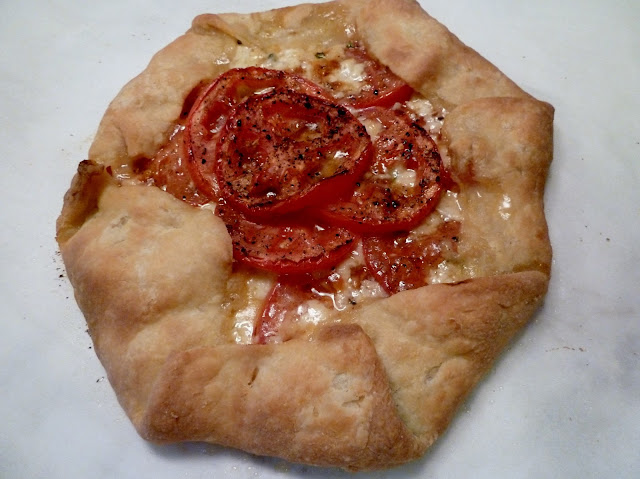 I cannot believe that I made this!  I am amazed at just how well it turned out.  I`m almost afraid to make another one, in case it doesn`t turn out this good.  And it really is good.  The basil with the tomatoes is just a good combination at any time.  The crust turned out perfectly (she said in shock) and it was so tender and flaky (she said shaking her head in disbelief and relief). 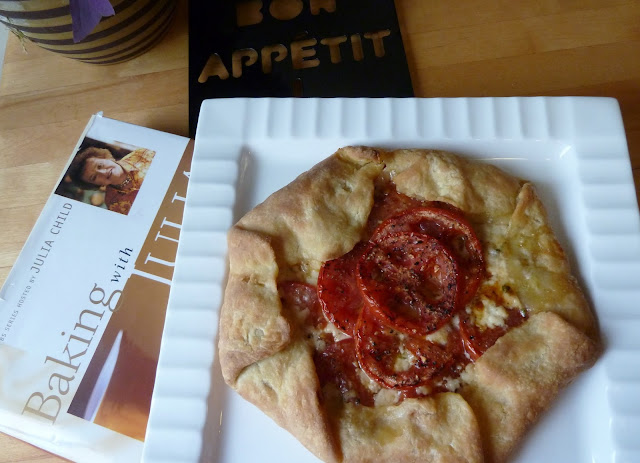 ﻿
I feel at this point, I need an Arsenio Hall audience to give me some joyous fist pumping and wooting!  It isn't often that I am this pleased with something I've baked....especially something from this cookbook.  (And those who know me, can attest to this...I am very critical of my work.)
Posted by Have Apron....Will Bake at 7:42 AM