Today's recipe is Rustic Potato Loaf.  I am feeling pretty excited about making this bread.  I love a bread with potatoes in it.  I think I am going to add chives to the mix, as chives and potatoes is an excellent combination. 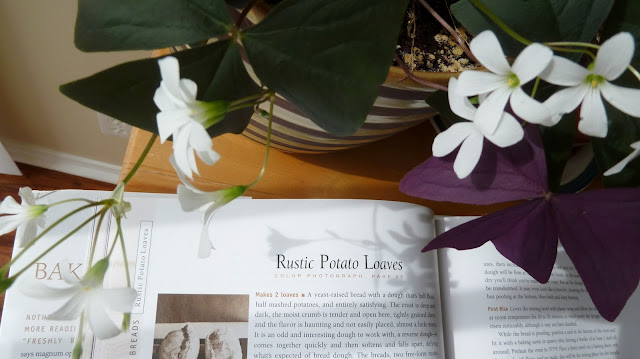 I really hope this recipe turns out, I am looking for a good potato bread.  If anyone is interested, I have a great Cinnamon Bun recipe from Bon Appetit, that uses Yukon gold potatoes in the dough.  It is by far the best cinnamon bun recipe I have ever made.  And I am hoping this rustic potato loaf becomes a favourite too. 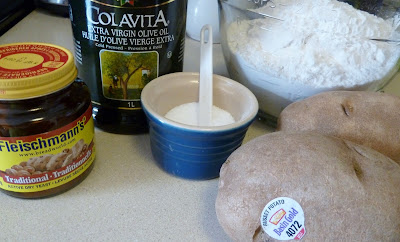 Ingredients are all ready to go (what few of them there are). 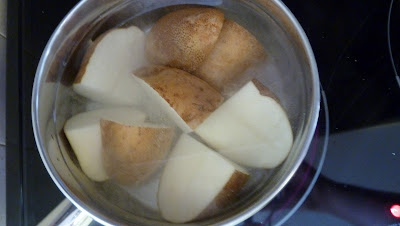 Potatoes ready to get their boil on.  Let's get ready to BOIL! (Y'all ready for this!) What?  Boiling potatoes isn't that exciting??!!

I did leave the peel on, as I think that will look nice flecked in the bread, and hey, the peel is good for you! 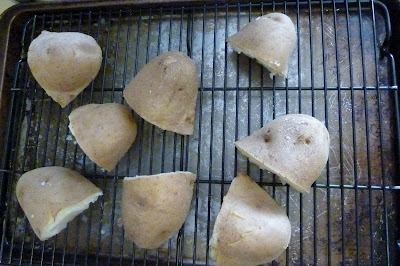 I think watching paint dry has just been bumped out of the top spot for fun things to do.  Move over paint; watching potatoes cool has entered the fun factory!  Oh you can try to look away, but you'll be back to watch. 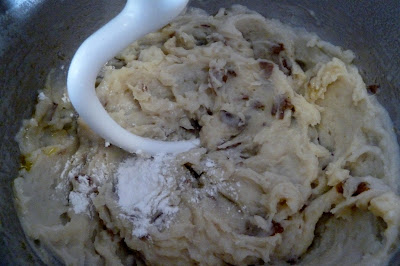 Potato mashing has now been done and we're ready to add the flour. 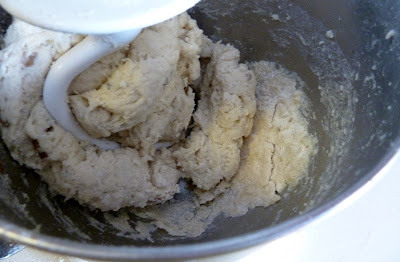 The dough is indeed very dry (as we were told it would be), so I wasn't worried.  My KA on the other hand, was feeling a little stressed.  In fact, it was getting all hot and bothered with all the kneading. 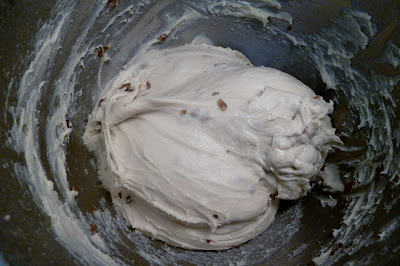 Here is the dough after the KA had an 11 minute workout.  Looks all soft and lovely.  See, no problem.  Though hubbie just asked if this is going to end up being an expensive bread. (Meaning is a replacement KA in my future.)  Won't know until I use it again.  Keeping my fingers crossed that my baby is okay. 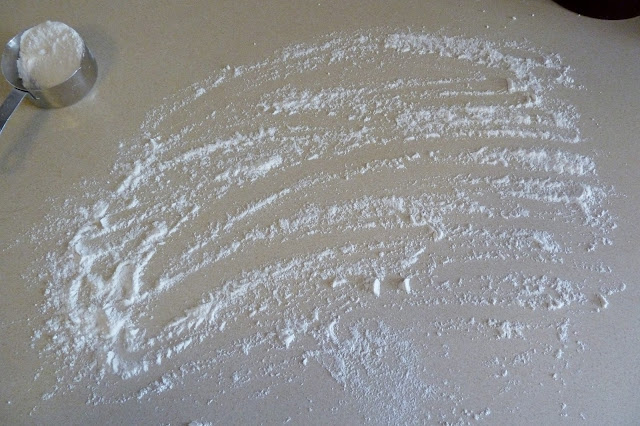 After a short 30 minute rest the dough is ready to be split in half and formed into loaves. 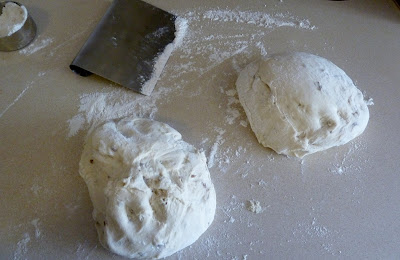 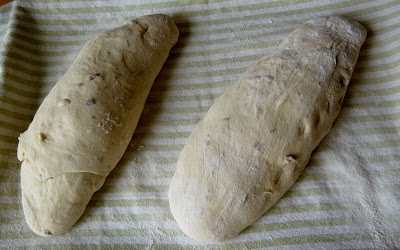 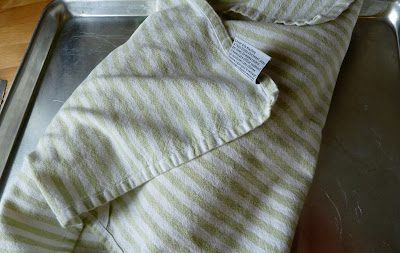 These loaves have a 20 minute rest, under cover. 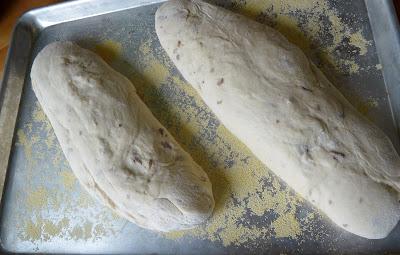 And then, they are turned seam side up on a sheet pan (covered with cornmeal).
Next, they are baked in an oven for 45 minutes.  Rather than spraying water in the oven (as suggested), I threw in some ice cubes.


I think I have succeeded making a rustic loaf...they do indeed look rustic!  To be honest, I love how they look. 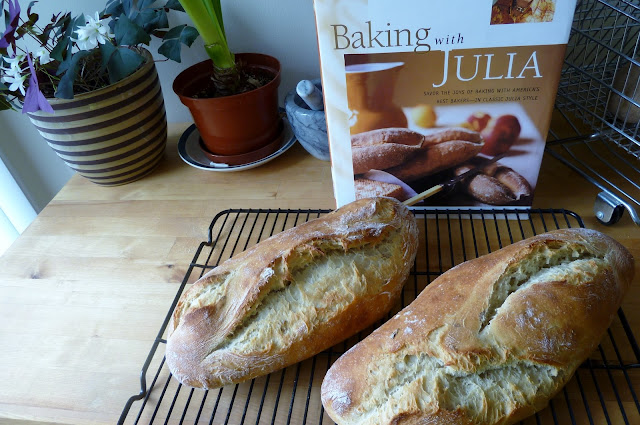 Here is a closer look at the loaf.  I think it looks like bread. (So, yay me!) 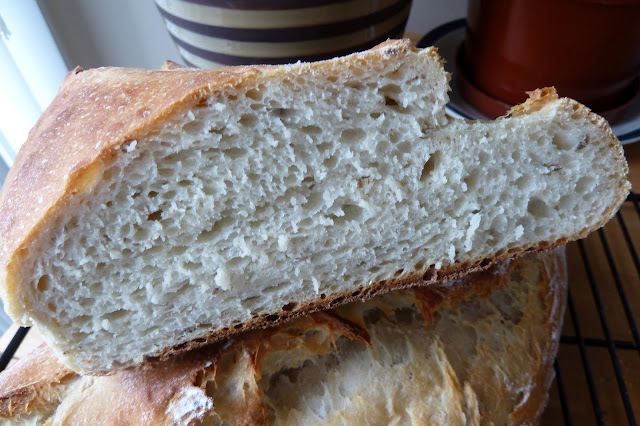 I'm impressed with how easily these loaves came together.  This truly is a fantastic recipe and I plan on making them again.  And next time, I will remember to add the chives as I had wanted to do. D'oh!

And because I'm Me, I made this bread again.  What?  Well, I did.  And I'm so glad that I did.  I think it turned out even better.  This time, I remembered the chives! (It's a Miracle.)  I did one loaf with chives and one with rosemary.  Both loaves are good.  In fact, I think this second batch turned out even better than the first batch.  The loaves seemed to be bigger this time around.  And extra tasty with the addition of chives and rosemary.  I liked the bread before, but now I LOVE IT!!!  And it is such a simple and quick bread to make. 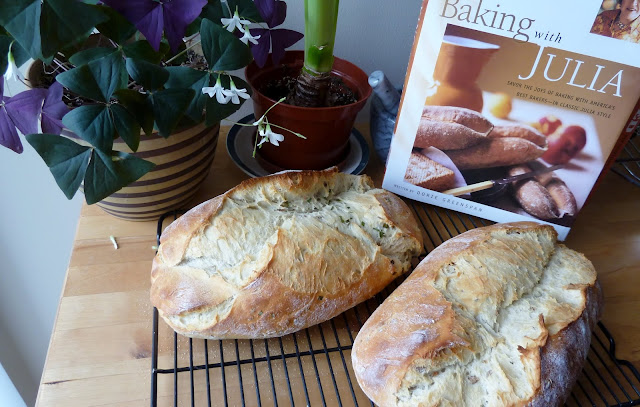 Check out our Host's site, Simply Sweet﻿.  Dawn shares the recipe with everyone.  And to see how everyone else did with this bread, go to Tuesday's With Dorie.