I bid you a fair Fondue

A fondue?  Really?  Huh.  It really isn't something I've ever made.  But I have visions of a fondue party....from the 70's.....women and men in polyester wear.  I think I was at a lot of those parties, growing up in the 70's....just without the fondue.  Makes me giggle to think about those clothes.

I can see how a sweet fondue would be a sweet thing to have......oh oh.....does anyone else feel a but coming?  And not a 'I like big butts and I cannot lie' kind of but. 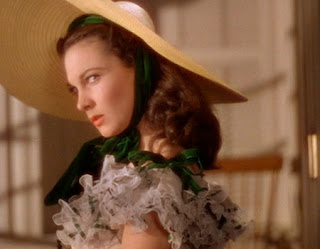 Surely she wouldn't go rogue two weeks in a row.  I declare there is no talking to this girl when she's like this.  My word, I feel the vapors coming on.......

So yeah, I'm going rogue.  But hey, I'm on holidays this week.  Well, I took 4 days off....didn't go on a holiday.  But sometimes just having a few days off (away from work) is a good thing.  Hubbie and I have been very productive. (we can actually walk into the storage room now...granted my shoulders and back are in pain....but a small price to pay for organized shelves!)  Plus he has been taking me out for lunch this week.  Lunch is my most favourite thing.  I think it goes back to when I was in my 20's and my friends and I couldn't afford to go out for dinner, but we could always afford a lunch at the nice restaurants.  And to this day, it is still one of my most favourite things. (right up there with rain drops on roses and whiskers on kittens)

This week I found a new restaurant....a new and good restaurant.  I can't wait to go back to Fresco Bistro.  It is in the WestEnd, so we didn't have to go downtown.  You know it is good, when you're texting a friend while still eating.....saying this would be a great restaurant for her birthday celebration.  But of course it is her birthday and I wouldn't want to pressure her one way or the other.  Cha, right!

So back to this rogue business.  As stated, I am on holidays.  And I think this week I just want to try some things I've seen and want (nay, need).
Dafna of Stellina Sweets posted a link on facebook from Smitten Kitchen this week. (a coconut bread that sounded awesome)  Naturally, it caught my attention, as I love coconut.  And it also got me wondering why I've never seen a coconut bread recipe before.  We seem to have so many breads out there (banana, carrot, zucchini, to name but a few), just seems strange that coconut wasn't there.  Or maybe it was, but I was out of the loop.

Anyhoo, I'm making the bread.  And at this moment, it is baking and smelling wonderful.  I can't wait to cut into it and have a slice.  I hope it tastes as good as it smells.  Perhaps one bite will transport me to Hawaii.  (in my mind of course....there's no transporter in my kitchen....but if Star Trek has taught me anything, it is that anything is possible.....but that's silly I know...there's no way I'd have a transporter in the kitchen....it is too cramped as it is....why I'd have it in our storage room...where we can now walk)  Just go cut the bread, already. 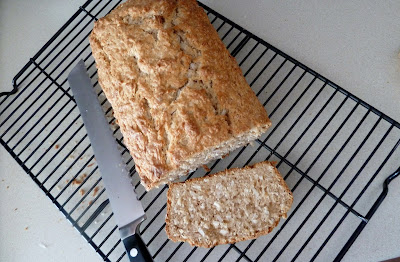 It's good....very good.  Deb Perelman of Smitten Kitchen was right about only putting a tsp of cinnamon in.  (good call)  Just having that hint of cinnamon is enough and the taste of coconut still comes through.  But I think it would be prudent to try another slice to confirm this.  I'm doing it for you, dear reader.  Yes, my selflessness knows no bounds. (can't type hands full of coconut goodness) 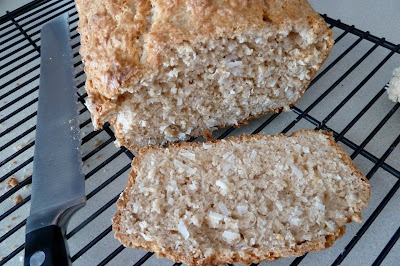 Next on my list of must-do's.....Baked Espresso Glazed Doughnuts.  I saw these on Shutterbean and knew the instant I saw them, that I NEEDED to make them.  But first I had to find a pan.  The hubbie and I spent an afternoon going from store to store in search of a pan.  Success was had....and here I am baking those doughnuts. 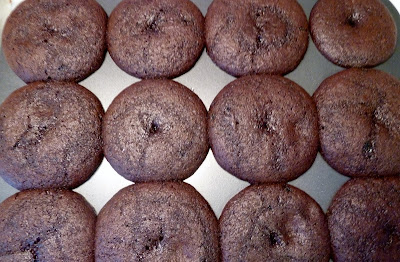 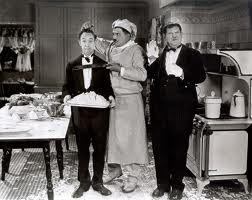 Well here's another nice mess you've gotten me into!

Maybe I've started a new trend!  DoughCakes.  Doughnut on one side and then turn them over and they're cakes!  No?  Okay, how 'bout CakeHoles?  Yes, I shall call them CakeHoles.  And all will come to feast their eyes on my CakeHoles.  Yeah...let's just call that the working title....and keep working to create actual doughnut shapes. 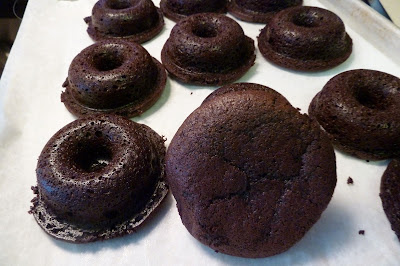 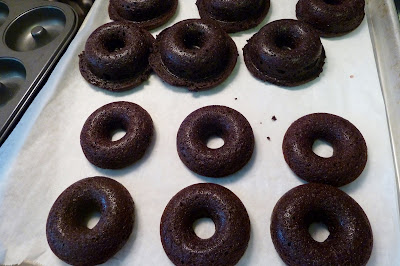 Now to get these babies glazed. 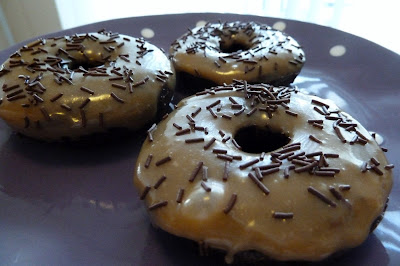 And because I care, I've also glazed my cakeholes..... 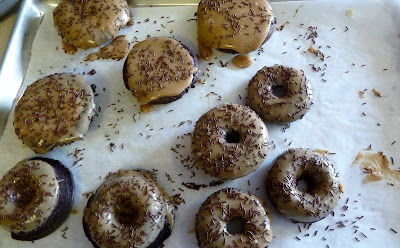 Okay, I need a little practice making baked doughnuts.  But I certainly like the idea of baked doughnuts.  Sometimes the illusion of a doughnut is enough.  If you want to see how they should be, go see Tracy's creations at Shutterbean.  I love this site.  And if you love lists, check out her site every Friday when she does her own list of favourite things.  (I'm hooked)


One more for the road.  These scones from Joy the Baker look way too good.
Feta and Chive Sour Cream Scones.  What a tasty way to end this post.  Of course my grocery store was out of chives.(??!!)  When did chives become the food that sells out??  So I decided to just use scallions (mostly the green parts).  I love scones.  I love they way they puff up and get all flaky.  Butter does make everything better in a flaky way. 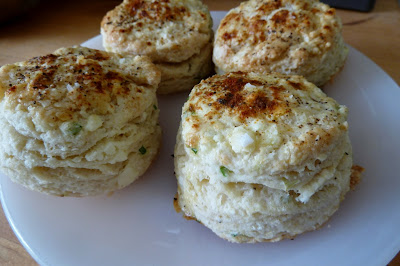 And so ends another episode One Rogue to Live.
Posted by Have Apron....Will Bake at 10:06 AM