Pudding can be a good thing every now and then. (unless you're making a cake and it turns to pudding.....been there done that!) This pudding, or Budino as it is called, can be layered.  I like the layered idea. <flashback to Farrah Fawcett hair days>
Of course, I will try to abstain from putting the pudding in mini mini jars with mini spoons....just for you Baked.(yes, I saw the facebook post about this!!!!)
But now all I can think of is this dessert in mini jars!  Or maybe in shot glasses.  Yes, what if I made this into dessert shots?  (it would require mini spoons though)  I think that would be uber cute!  Who doesn't like a layered shot?  Or would it be a big disappointment for people to realize it isn't an actual shot?  Well I say them's the risks ya take with me! (when did desserts and shots become risky?)
I might just showcase these to some friends this weekend.  (if they turn out and pass my inspection that is...the pudding not the friends....but don't let them know they're off the hook....the friends not the pudding)

Soooo I just looked at the recipe and I think I have all the ingredients....except bourbon.  But whateves (all the cool kids say whateves, not whatever.....cause we're cool....we're so cool that we don't even care, so we say whateves to it all)  Okay, what was I talking about?  Feel like I just had a "oooooh shiny" moment. 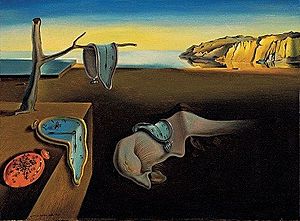 The ingredients weren't really an issue.  But then I browsed the actual instructions and noticed that I need three heat proof bowls and a saucepan.  Does this not seem like an inordinate amount of baking things to make pudding??? (and by things I mean bowls, but after using the word inordinate my brain went all Dali....Salvador Dali that is.
Dali in the house!  And yes, I did just spend an hour looking at Dali stuff on the interweb. (talk about an "ooooh Shiny" moment)  He was such an interesting character.  His art was the first artwork that intrigued me when I started taking art classes in high school.  Some may be asking, "Sandra, what does any of this have to do with baking your Budino this week?"  And I'd love to come back with a really intelligent response.....but all I've got is, "my cat's breath smells like cat food."


Anyhoo,I started the recipe.  Got all my ingredients at the ready. 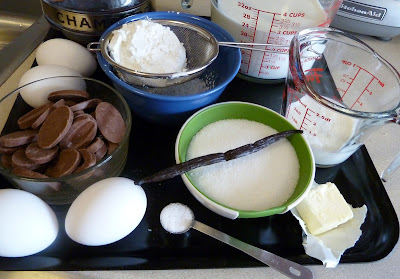 As I don't have bourbon, I used a tablespoon of Chambord. (black raspberry liqueur)  Once I scrapped the vanilla bean out, I added that to the tablespoon of Chambord.  Trust me, that is not dirt in the bowl...it really is the inside of the vanilla bean.
Next, I had to add the egg yolks and eggs to the cream.  These got all whisked up.
﻿
The milk chocolate sat in waiting.  I used the feves that I found when we made something else that required milk chocolate....but can't think of what that was.  Hmmm.   The pots de creme!  (totally had to go back and look at previous posts to get that)
﻿
﻿
After filling all three bowls, it was time mess up a saucepan!  Into the saucepan I whisked together the sugar, corn starch and salt.  To this, I added the milk. 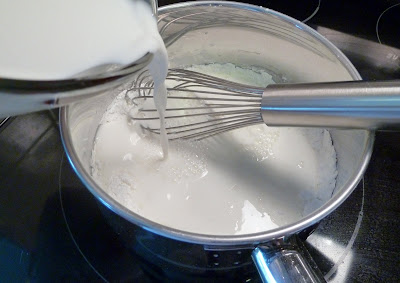 This mixture had to be heated up and I proceeded to make a total mess of my stove top and whatever else was lying around. 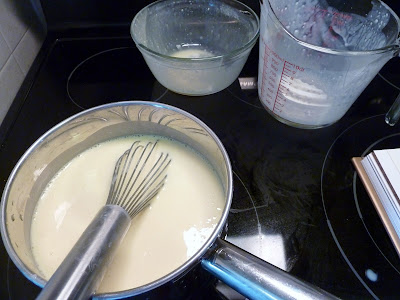 Now after this is heated up, I am then supposed to pour a third of this mixture into the egg mixture while whisking constantly.  Not a problem.....but am I supposed to 'eyeball' a third???  I don't do that.  This is stressing me out.....and what about the other bowls?  When do I use the other two bowls?  I feel like my chambord and vanilla bean paste bowl is going to be left out?  Stress levels rising.  And I've re-read the recipe instructions so many times, that I've now lost count.  Maybe if I read it out loud, it will make more sense.  Nope.  It's grade 7 math all over again....damn those word problems.   Work it through...there's no crying in baking!!!!
I worked it out!  And no bowls were left behind.  Woot Woot!!  Please, please, please tell me I wasn't the only one stressing about this??!!!!  It's pudding!  How can pudding be complicated???
I decided to make them mini.  I used some shot glasses and filled them with the vanilla bean pudding first.  The heat from the pudding was steaming up the glasses. 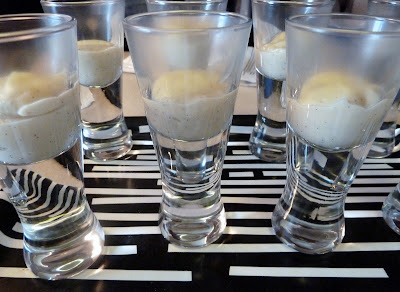 These had to cool in the fridge for a bit, before I could add the milk chocolate layer. 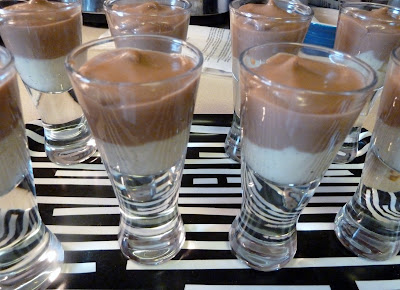 Well, I think they look pretty cute.  The pudding go so nice and thick.  I was concerned that it wouldn't.
I even got mini spoons to go with them.  Had to put them next to a tablespoon and a teaspoon just to see how tiny they were! 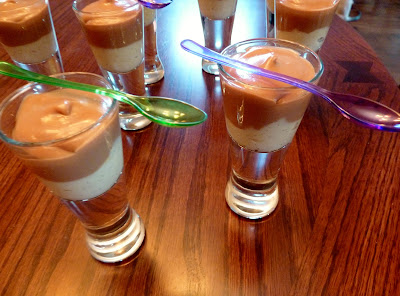 They passed my inspection and were shared with some friends.  Everyone said they enjoyed them.  But would they say they didn't?? So I asked the hubbie (as I know I can get the real deal with him).  And he liked it!  He really liked it!  We each tried a spoonful and the milk chocolate pudding before it was chilled and neither of us thought it was stellar.  But once it was cooled and combined with the vanilla bean layer hubbie thought it was great.  I agree, the pudding is much nicer chilled.
Would I make it again?  Maybe.  I didn't get the flavour of the chambord at all from the vanilla bean layer.  Perhaps I would try different flavourings.  Maybe try it with a dark chocolate.  And instead of the vanilla bean layer, try a banana flavour. 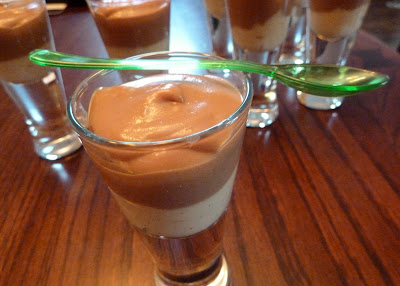