This is my second attempt at Focaccia.  My first was with the Baked Sunday Morning group a few days ago.  We made Cheesy Focaccia from the Baked Elements cookbook.  It is interesting to be making focaccia from two different recipes within the span of two days.


Oh bread…how I knead and need you in my life.  Give me comfort.  Save me from the madness around me.
I have read that making bread can be very therapeutic.  I can imagine that it is a good work out if kneading by hand.  I am hoping my kitchenaid will be up to the task….though I’m a little concerned as there has been a lot of talk on TWD about kitchenaid mixers not being up to the task.  My kitchenaid says Heavy Duty on the side.  Hmm.  Not sure if that is in the same league as a Professional series or what??  Guess I’ll find out.  Our KitchenAid blender bit the dust this past week.  (and the hubbie went out and got me a new one that seems way better than the one I had)  Hopefully I won’t need to be shopping for a new mixer too.  Ack!

I have olive oil and balsamic vinegar at the ready.  (my favourite way to eat focaccia is to dip it in this mixture of oil and vinegar)  Yum!  I may be a little premature with this, as I see I need to let the dough rest for a good 24 hours or so.  <tick tock> 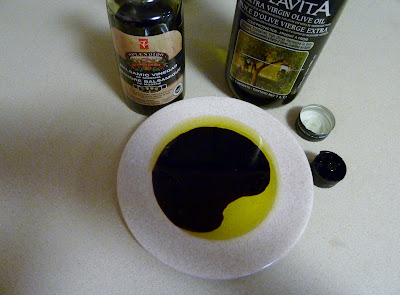 I am ready to get this dough going.  I should have probably started it earlier, as I mentioned previously it does require at least 24 hours in the refrigerator.
But I was too busy making my other focaccia. (see previous February post)  It turned out beautifully by the way, and you can see the recipe and everyone elses creations at Baked Sunday Mornings.  It was really good and I totally recommend it for a quick focaccia.

So we start with yeast and flour. 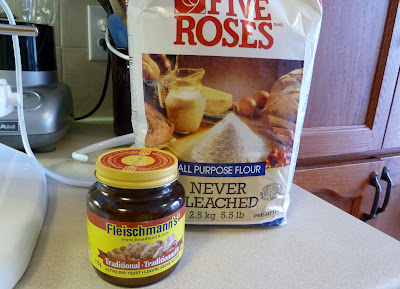 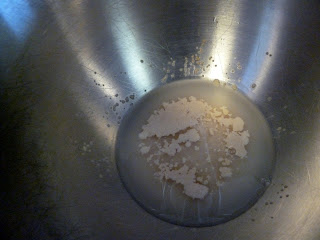 My yeast is starting to get all creamy. 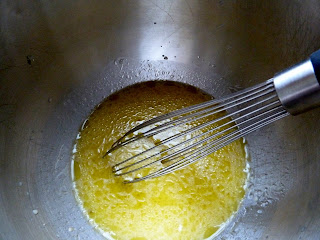 Time to add the rest of the water and olive oil to the yeast mixture. 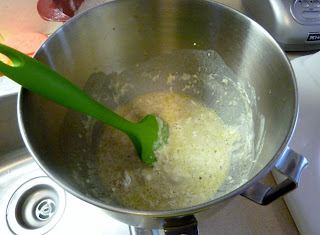 Then half of the flour and salt mixture get added to that.

Once it is mixed in with a spatula, the rest of the flour mixture gets added in and then the dough hook it ready to do its job. 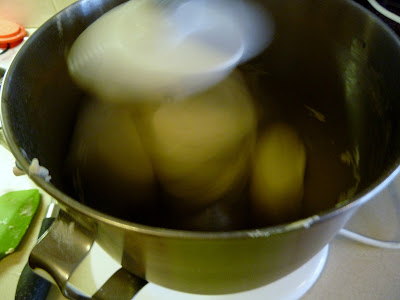 Hee, hee.  That is a really bad picture.
I halfed this recipe, as I was really hesitant to put my mixer to a full recipe test. With half the recipe, the mixer did just fine.....though it was a bumpy ride. (had to hold the mixer down as it was moving across the counter!)


This is my stretch test.  The recipe says it should stretch but not tear.  I think I would have been fine, if I had stopped playing with it.  But it was so cool stretching it out! 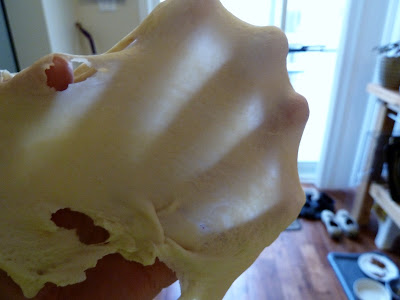 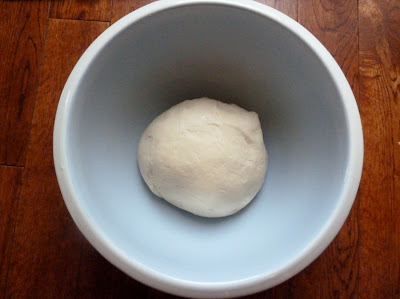 Into the bowl it goes for the first rising.


That is some fine rising right there!
Everyone one sing along with me....rise up, rise up....
Parachute Club! (oh it's in your head)


Okay, this dough is looking pretty good.  Just going to deflate it and let it rise again for another hour.
And it looks really good on this second rising.  I can see the little bubbles forming in it. 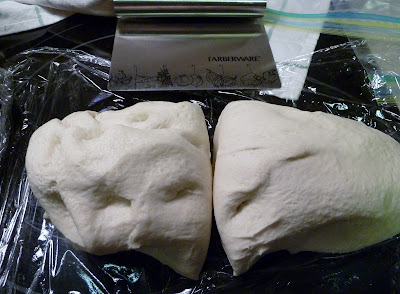 Now I just need to cut it into two pieces.... 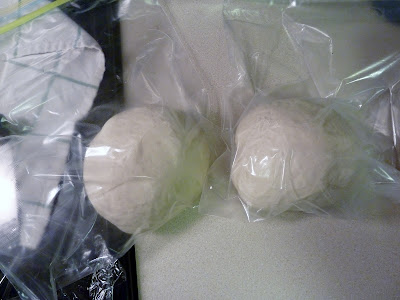 and put the pieces into (what I read after the fact--oil lined) bags and put them in the fridge to chill out for 24-36 hours.  Hopefully the lack of oil in the bag won't matter.  And here I thought I was going to get through a recipe without missing a step.....sigh.


It has only been about 18 hours, and the dough is looking good and feeling good.  I think this is going to be another good focaccia recipe.  I had my doubts that I would be hitting a homerun with two focaccia recipes in one weekend....but (fingers crossed) I think this is going to be a winner too!!!  The dough doesn't lie. (please don't lie dough)
I am actually excited to get this one in the oven.

I have now taken one of the dough balls out of the fridge.  It is going to sit on the counter for an hour and half to bring it up to room temperature.  Just need to cover it with saran wrap so it doesn't dry out. 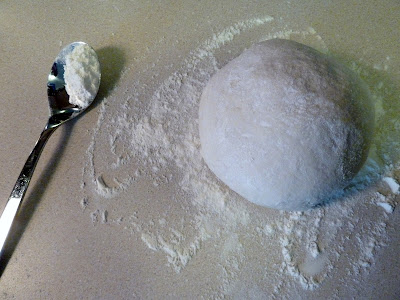 So I (again) didn't fully read the instructions.....this seems to be becoming my thing....I don't want this to be my thing!
I forgot to let the dough sit after I stretched it out on the baking sheet.  Instead, I scored it, brushed it with herb infused olive oil and tossed it in the oven.  So needless to say, this was not a great success. 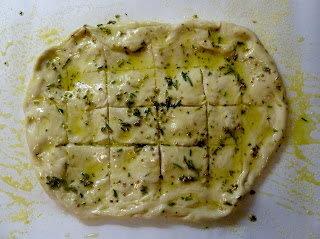 Before the oven.  Looking a little scrawny.

I didn't even take an after picture of it, since it was so pathetic.  I decided to just let it go and move on.


I still have one other dough ball in the fridge, so all is not lost.  This time I followed the instructions. (interesting, this following instructions thing might just catch on) 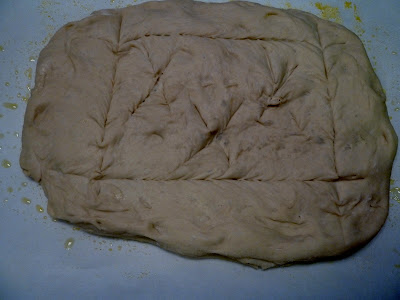 It is looking much better before going into the oven. 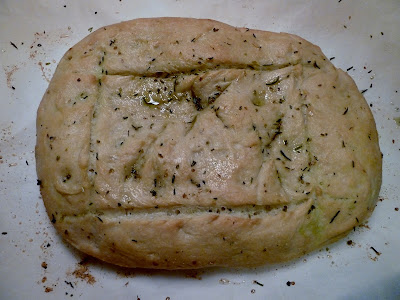 And it looked pretty good after 20 minutes in the oven.  Could probably use some work on scoring and shaping the dough....but that's a lesson for another day. 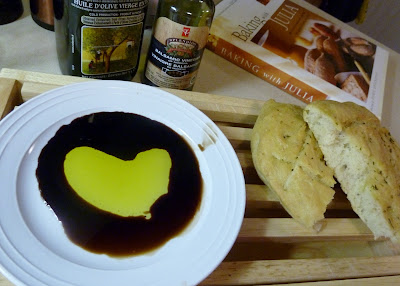 I *heart* this focaccia. 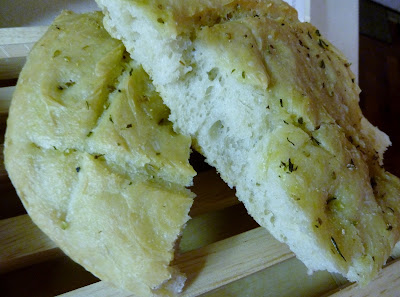 It really is a good focaccia.  But it was a long, long process.  I could see myself making it again at some point.  And who knows, maybe next time I'll follow all the instructions!
Bon Appetit!
Posted by Have Apron....Will Bake at 6:04 AM