I am on the mend from the nasty demon illness that kicked me in the butt last week.   Though it seems to be a slow mend.(very slow....darn asthma....darn cold weather...that's a double darn right there)  But at least I am back to work and I can now taste my food.  And more importantly can get back to baking!  Whew!  As much as I loved having my hubbie bake for me last week (and truly I love him so much for doing that), it feels good to get back into the kitchen to bake again.  It seems I might have a baking addiction.  But I think recognizing the addiction is the first step, right?  Next step is straight into the.......oh dear....is this.....is this the kitchen.....oh dear indeed.

I love bread so much.  It was the first thing I thought of when we went to Paris a few years back.  Yep, I couldn't leave there without going into a boulangerie to pick up a couple of the baguette tradition.  It made me so happy and I felt (for the briefest moment) like a Parisienne.

It has been a dream of mine to master bread. (and not just by slicing another piece with a serrated knife....and lovingly buttering it)  I would say bread is that one food that I have always wanted to make and not just make but make great.  I have since discovered that like a lot of baked goods, bread is one of those things that never seems to turn out the same way twice. (at least for me)  So many variables when it comes to bread making.  Is my yeast old?  Is the room too cold for the rise time?  Did I add too much flour?  Did I add too little flour?  Was this wrinkle in my forehead an hour ago?  I believe I'm filled with enough self doubt in general without adding anymore.

So I don't drive myself crazy trying to make the perfect loaf of bread.  Instead, I get the hubbie to drive me to my favourite bakeries.
From True Loaf I get the oversize sourdough, raisin chai spice bread or a french epi.  (to name but a few)  Then to Bread & Sons for a fantastic multigrain or spelt loaf.  Not to leave out my West Coast (Canada) friends, Terra Breads was my favourite place in Vancouver to get some good bread.  They made the best Potato Chive bread (with chunks of red potato).....heavenly....and their focaccia....oy vay!  One bakery that I haven't been to yet here in Ottawa is the Art is in Bakery.  I love their bread (which is sold in stores) but have yet to visit them.

Let the bread making games begin!  (unlike the Hunger Games, everyone survives in this game....and comes out a winner....should the focaccia turn out) 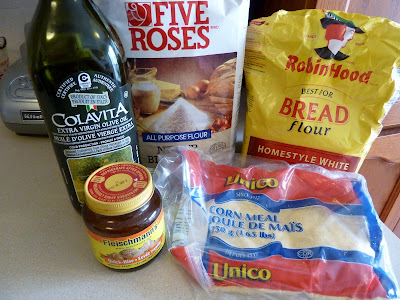 It is a quick and easy start.  Just throwing the flours, salt, yeast, water and olive oil together in the mixer. 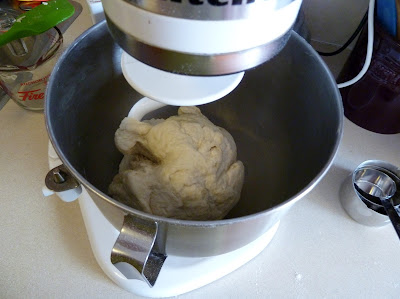 Once the dough all comes together with the help of the dough hook it is ready to be stretched.  It is a lovely dough at this point.  Very easy to stretch out and play with.  Not that I was playing with my food.  It showed no interest at all in fetching a ball.


The next step is to fold it into a letter fold.  Is this a letter fold?  It has been a while since I've sent a letter....hmm.....I used to love writing letters and getting letters.  I've still got all my letters from the hubbie(before he became the hubbie)....he was talented with letter writing.  Everything is instant now....no more waiting a week for a letter......going to the mailbox everyday hoping for one to appear....sigh.
Focusing on the bread now.


And now I'm going to ruin my perfect letter fold by tucking it into a ball.  And that my fine friend is what happens when ya don't play ball!! 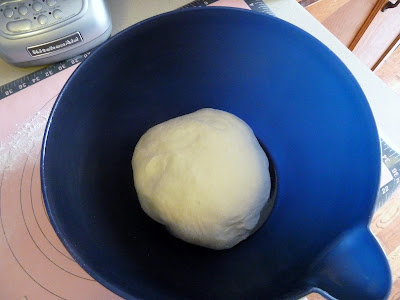 Just going to cover this up and let it sit for a half hour.  And then I do it all over again. (stretch, fold, tuck into ball)
﻿

And after thirty minutes my little dough boy has grown into a dough man.  I'm so proud of him.


Let's just stretch out a bit. 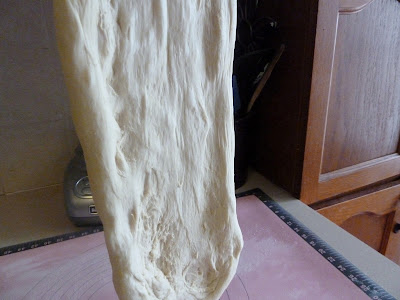 Just look how nicely it stretches out.  It really is fantastic dough to work with and I may be playing with it a bit here.  I just couldn't resist picking it up to stretch it. 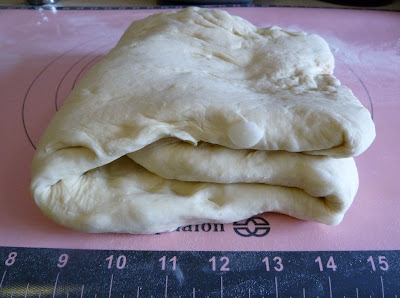 And look at how much bigger my letter fold is.  Nice and puffy.

Another thirty minutes of rise time again.  And then the dough gets stretched onto a baking sheet that has been covered in parchment paper, then oiled and dusted with cornmeal. 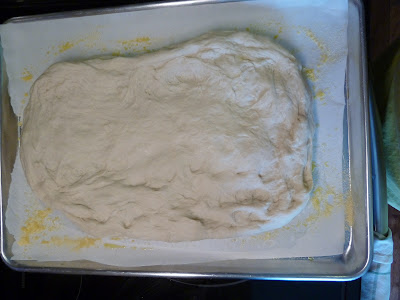 I am going to let it sit for another 20 minutes to rest.  And then stretch it to fill up the baking sheet.
Oh my god, the focaccia dough is so beautiful. I think I'm in love......you know when you touch the dough, that it's going to be good. I cannot wait for this dough to be ready for the oven.  This is the part of bread making that pulls you back to making it again.....the feel of a perfect dough that you just know is going to make a perfect bread.  Heaven in your hands.  A joy to your baking heart.  And soon to be a delicious addition to your recipe repertoire. 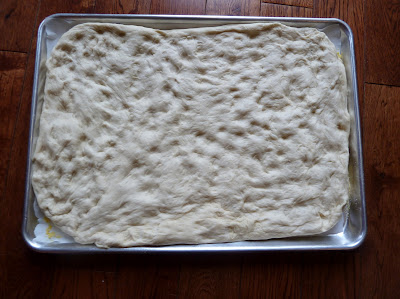 Now to brush it with olive oil, rosemary and oregano.  ( I didn't have thyme)  A little salt and pepper sprinkled on too. 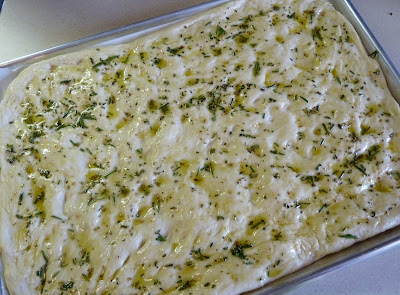 Between risings, I got the toppings ready. 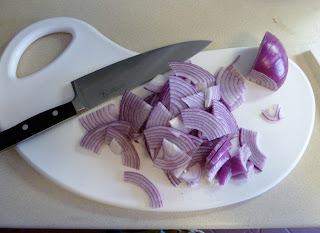 Chopped some onions....which were then caramelized. 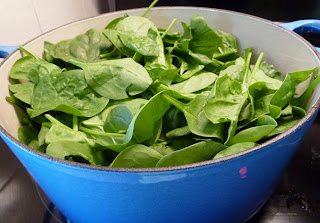 After that I wilted some spinach in the same pot. 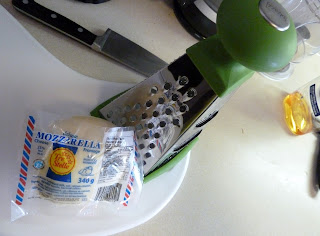 While the spinach was wilting, I shredded some cheese....... 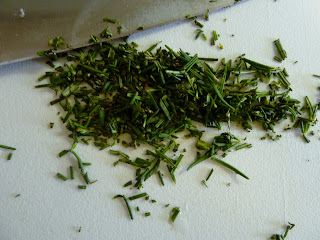 and chopped some rosemary. 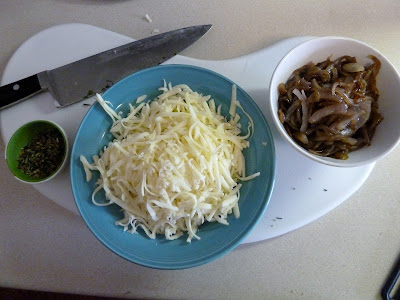 The spinach refused to be included in this photo.....can't blame it really....who wants to be captured in a photo all wilty....after looking so good its first photo (pre cooking)

So the dough is now in the oven.  Giving it 10 minutes to brown a bit. 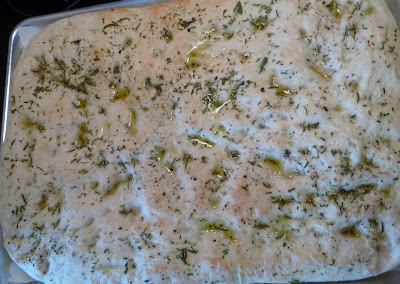 And here it is after 10 minutes in the oven.  Just a bit of browning on the edges. 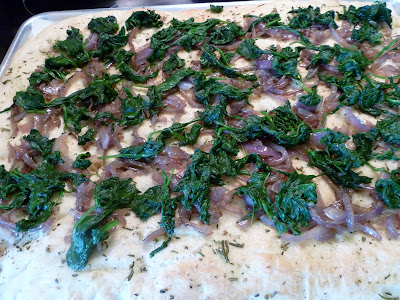 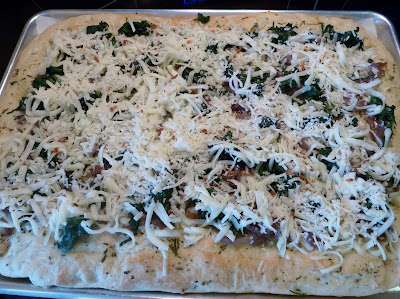 Next comes the cheese (I used mozzarella and parmesan) and the red pepper flakes.

Back into the oven it goes until the cheese is all nice and melty. 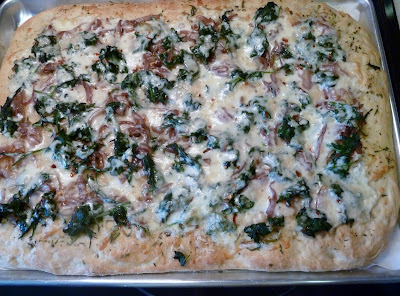 This focaccia is amazing!!!  I am so going to make this again.  It is such a great base, that would be great with so many different toppings.  Such a quick recipe too.
We totally  loved this!  I recommend it to anyone looking for a good, quick focaccia recipe.  Have a look at Baked Sunday Mornings to see everyone else's creations and to get the recipe. 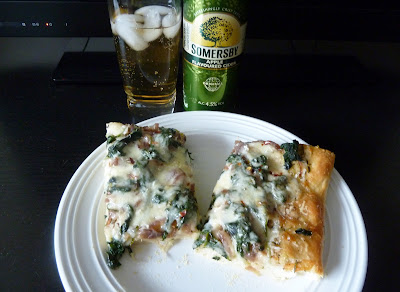 Ahhh, life is good when the bread is good.  And a good cider doesn't hurt the situation either!
﻿
Posted by Have Apron....Will Bake at 8:22 PM