Baking with Julia-Best Ever Brownies

Let me start by saying that I am not a huge Brownie fan. <gasp>  I don't hate them.  (who could hate anything with chocolate?)  I'd say they just aren't my go to dessert treat.

I did try the Best Ever Brownies by Baked and I did like those.
But those Baked Boys can do no wrong in my eyes.

So these ones will have to live up to the Baked ones.  I haven't even started baking yet, but I'm already having my doubts about them.

I find it really hard to gauge when a brownie is done.  They are so easy to under or over bake.    (of course my thing is overbaking so generally no worries about underbaking)

Gosh, I am feeling like a regular Negative Nelly going into this baking session.   Hope all this negativity doesn't transfer over to my kitchen.

Looking at the recipe, I was worried about it not being chocolatey enough.  The last brownies I made had a lot of chocolate in them, including dark cocoa powder.
I was tempted to change this recipe around and add more chocolate and cocoa powder but then I remembered that  I'm not someone who plays with recipes before I've even tried it.  Don't know what came over me!
So I'm sticking with the original recipe as is. 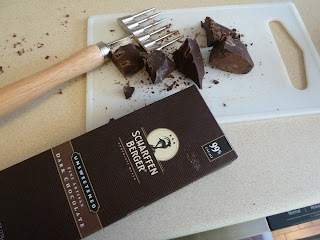 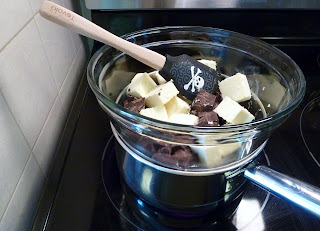 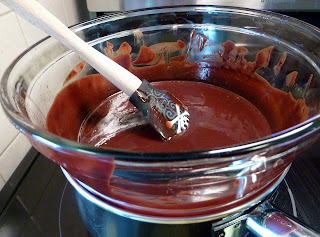 Turn on some heat and make it all melty good...

Fairly simple recipe.  Though I have to admit I was a little confused by the instructions regarding the eggs and sugar.  But I think I got it right.  The brownies look good going into the oven.  I have high hopes for these, after all the negative nelly stuff earlier on. 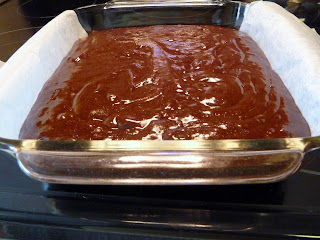 I have baked them for the full 28 minutes plus a few more minutes as I used an 8 inch pan rather than a 9 inch.  (now I'm not saying size matters....it just changes things)
The middle feels giggly.  But the instructions do say the brownies will be perfect if they're just barely set and still pretty gooey.  Okay, well I'd say I've reached that point with these brownies.  Will leave them to cool for a bit and then have a look.

So the brownies have now been cooling on a rack.  And they still seem pretty gooey.  It was difficult to get a clean cut brownie.  Putting them in the fridge has helped to firm everything up but it still isn't the same as other brownies I've had.   I guess I'm more of an advocate for the cakey brownie.  Perhaps if I had baked it for longer.  Ah well.....truth be told it did taste good.
Would I try this recipe again?  Maybe, but I've so many other brownie recipies to try and one that I already love. 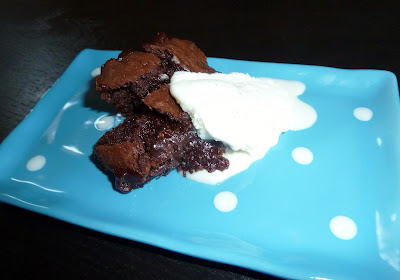